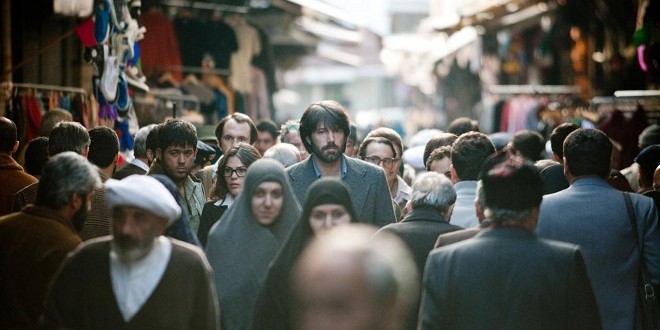 Posted by: Steven on October 12, 2012 in Movie Reviews Leave a comment

In my book, there are documentaries, and then there are biopics.  I realize that I am probably in the minority on this point, but I am less inclined to give certain films a pass for by-the-numbers storytelling or weak character development simply because it is “based on a true story.”  That said, first-time feature screenwriter Chris Terrio and actor/director Ben Affleck certainly have a compelling story to tell in Argo (2012).

On November 4, 1979, the U.S. Embassy in Iran was overrun by an Islamic revolution that was full of vitriol toward the nation that was harboring its deposed dictator.  Fifty-two hostages were taken and held for 444 days.  It is difficult to put 1979 in perspective in a post-9/11 world and in the wake of the Arab Spring, but three years after the U.S. bicentenniel, acts of terrorism and rioting were not commonplace on the nightly news.  As a child, I remember the families who counted down each day a hostage was held by planting another flag in their front yards.  Although the economy was certainly an open issue in the 1980 election, my own parents voted Republican for the first time in their lives based on the perception created by the situation that President Carter was weak on foreign policy.  And on the first anniversary of the hostage crisis, Ronald Reagan won the election in a landslide.  It was that big of a deal.

Often times, it is the footnote in history that makes for the most interesting story.  In the embassy takeover, six U.S. diplomats escaped and took refuge in the Canadian ambassador’s residence.  Within a matter of weeks, CIA operative Tony Mendez (Affleck) enlisted the assistance of Hollywood producer Lester Siegel (Alan Arkin, playing a composite of four real characters) and makeup effects expert John Chambers (John Goodman) to create a cover for Mendez to extract them from Iran safely.  They set up a production company to give the whole world the impression that Mendez and the six refugees were actually Canadian filmmakers scouting locations to shoot a new science fiction film entitled “Argo.”

The last 40 minutes of Argo are worth the price of admission alone.  Behind the camera, Affleck is as adept as any director at credibly creating and maintaining suspense.  And aside from Affleck’s own overly-somber take as a would-be film producer, the performances are all strong.  (Bryan Cranston, in particular, brings the appropriate level of righteous indignation as Mendez’s boss, Jack O’Donnell.)

But the film also has problems – particularly in the second act.  With its detailed subject matter and a two-hour running time, Argo has to be a plot-oriented film, so the half-hearted attempts to develop Mendez’s character really do not stick.

And the old adage that truth is stranger than fiction does not excuse Affleck’s choice to abruptly change the tone with all of the subtlety of a hammer to the skull.  As Goodman makes his first appearance (complete with the pop music cue), a film that had the energy of United 93 (2006) suddenly becomes The Producers (1968).  It would have been interesting to see more parallels between the production of a movie and the spy game as seen through Mendez’s eyes (such as the scene involving the option for the Argo script).  Instead, we get the same tired tropes, as Affleck and Terrio give Goodman and Arkin about three or four too many one-liners about producers, directors, and the press.  (Hollywood is crazy!  Have you got it yet?)  And all of this meta about the ego-driven film industry becomes a bit ironic in the self-congratulatory closing credits, where we are shown how much effort was made to cast actors who looked exactly like the characters they portrayed … except Affleck himself, that is.

Expressing an appreciation (or lack thereof) for all sorts of films for over 25 years.
Previous: Frankenweenie (2012)
Next: Seven Psychopaths (2012)