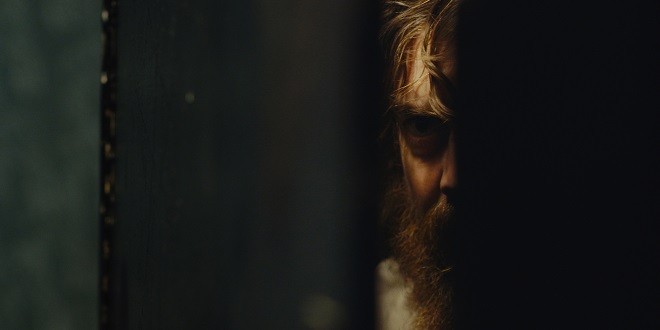 Posted by: Steven on May 3, 2014 in Movie Reviews Leave a comment

There is certainly no shortage of cinema – classic or modern – concocted to explore the slippery slopes of revenge.  The theme of writer/director Jeremy Sulnier’s Blue Ruin is well-tread ground – as is the underlying plot.  Change the names and the setting, and this distinctly indie film essentially ticks the same boxes as countless Westerns (i.e., the stranger who rolls back into town with one thing on his mind, the Hatfields and the McCoys, etc.)  What is unique about Blue Ruin is how Sulnier has drained this familiar narrative of anything romantic.

Like many protagonists who have inhabited this particular landscape, we discover Dwight (Macon Blair) drifting through a purposeless purgatory until he is presented with the opportunity to take vengeance upon the murderer of his parents; but Dwight’s exile is contemporary homelessness – stealing a bath in an empty house, picking through garbage for dinner, etc.  When Dwight’s call to action arrives, it is not a pair of six shooters or samurai’s blade that he extracts from a dusty bag in the ground – it is a car battery covered in plastic to reignite a car he has used as shelter.  Sulnier takes his sweet time with Dwight, and for certain stretches, Blue Ruin feels like a somewhat subversive take on the procedural, as Dwight’s precautions and plans never quite work out.  When the drama gets too heightened, Sulnier is keen to inject moments of absurd reality (which is probably what has drawn comparisons to the Coen brothers), and yet, the resulting levity never betrays a prevailing sense of melancholy.

Blue Ruin is adeptly visualized; but the lynchpin to its effectiveness is Blair’s performance.  Sulnier’s script makes a point of robbing Blair of juicy monologues and pithy one-liners that typify the genre.  Blair has to do most of the heavy lifting with his actions, his expressions, and his body language.  At one point in the film, when Dwight is compelled to change his physical appearance (in an ironic shrouding of his identity), Blair brings a subtle quality to the conveyance that actually enhances the character’s vulnerability.

With so many aspects to appreciate about Blue Ruin, the most pressing question I had exiting the cinema was:  Who are Jeremy Sulnier and Macon Blair?  I mean, Murder Party (2007)?  Seriously?

Expressing an appreciation (or lack thereof) for all sorts of films for over 25 years.
Previous: Joe (2014)
Next: Is the World Too Big for Godzilla?