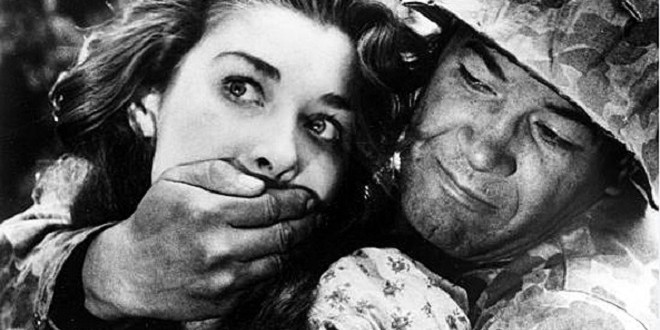 Posted by: Steven on October 27, 2012 in Other Stuff Leave a comment

In 1952, at the age of 24, director Stanley Kubrick borrowed about $10,000 from family and friends to make his first feature film, Fear and Desire (1953), based on a script by his personal friend, Howard Sackler (who later won the Pulitzer Prize for The Great White Hope in 1968).  At the time, Kubrick had to handle almost every aspect of production himself, and as it turns out, he had to go back to his family and friends for additional funds when he hit a snag in the sound editing.  At the time, Kubrick described the film as “[a] drama of ‘man’, lost in a hostile world-deprived of material and spiritual foundations-seeking his way to an understanding of himself, and of life around him.”  As years passed, Kubrick would dub his own debut as “a bumbling amateur film exercise,” and he attempted to acquire all prints of the film after it reached the public domain.  Over the last several decades, the film has popped up sporadically at various film festivals, on bootlegs, and last year, on Turner Classic Movies.  (I tried watching a version online several years ago, but the quality was so bad that I ceased after about five minutes.)  This week, Kino Classics finally released Fear and Desire on DVD and Blu Ray, which was restored from the original camera negative by the Library of Congress.

The 61-minute film begins with the following narration:  “There is a war in this forest.  Not a war that has been fought, or one that will be, but any war.  And the enemies that struggle here do not exist unless we call them into being …”  Four plane-wrecked soldiers are caught six miles behind enemy lines and plan to float their way back to friendly territory down a river.  Suffice to say, it’s not exactly subtle.

As debuts go, this is no The Blair Witch Project (1999) or Reservoir Dogs (1992).  The minimal budget is on display in all respects, including, most notably, the acting.  To put it simply – this is clearly a film for the hardcore Kubrick fans.  (The best starting point for the newly initiated is The Killing (1956).)

All that said, tracing the five-year progression from Fear and Desire to The Killer’s Kiss (1955) to The Killing to Paths of Glory (1957) is simply astounding.  At the time Fear and Desire was made, much of popular cinema consisted of not much more than shooting stage plays.  Certainly this would have been the most pragmatic approach for a director with such a limited budget.  Instead, Kubrick took his cameras on location to California.  As such, the one common denominator that emerges in all of these films is Kubrick’s ambition to distinguish popular filmmaking as a unique art form.

NOTE:  The Kino release of Fear and Desire also includes a short film of Kubrick from the same era, The Seafarers, but unfortunately, nothing else.  The Criterion Collection edition of The Killing also includes Killer’s Kiss.

Expressing an appreciation (or lack thereof) for all sorts of films for over 25 years.
Previous: Cloud Atlas (2012)
Next: He Said: Antichrist (2009) as an Exercise in Gothic Horror – No More, No Less