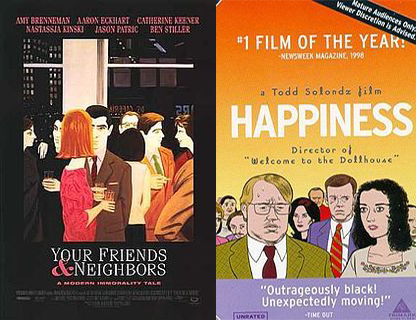 Writers/directors Neil LaBute and Todd Solondz both had auspicious beginnings in the fertile ground of indie cinema in the 1990s – right before a wave of political correctness swept over American filmmaking on 9/11.  And in my opinion, in 1998, both filmmakers assembled stellar ensemble casts to make their best work – pushing the limits of how dark a dark comedy can/should be. (WARNING: The scenes linked in this review may contain language of a graphic nature.)

As a theater student at Brigham Young University with Aaron Eckhart, LaBute first raised eyebrows with a play about two businessmen on a trip who scheme to emotionally torture a deaf woman, which eventually became his directorial film debut, In the Company of Men (1997). With the exception of the critically underrated The Shape of Things (2006) (also adapted from his own play of the same name), his career as a director – mostly portraying other writers’ scripts – would span from the utterly unremarkable (Nurse Betty (2000), Possession (2002)) to the downright awful (The Wicker Man (2006), Lakeview Terrace (2008), Death at a Funeral (2010)).

LaBute’s high water-mark was Your Friends & Neighbors (1998).  As Roger Ebert described it, sex is the primary currency in the transactions between five upper-middle-class friends who are conspicuously unnamed (until the credits roll) and live in an unidentified urban environment.  I use the term “transaction” because these are five “monsterously selfish” individuals who, as it turns out, really do deserve each other.  There is the suburban married couple, the white-collar Barry (Eckhart) and his good-wife/part-time writer, Mary (Amy Brenneman).  On a pragmatic level, they seem to be a perfect match – Barry identifies his best sexual partner as himself, and Mary is incapable of saying the word “fuck”, much less accepting sexual contact (three lovers in three separate scenes have to ask, “Is it me?”).  Then there is the urban live-in couple on the outs, Jerry (Ben Stiller) and Terri (Catherine Keener).  From their first scene, we learn that Terri is as emotionally cold as Mary is sexually frigid and believes switching teams will somehow solve her intimacy issues; but beyond her icy demeanor, Terri does have a legitimate point about theater professor Jerry – he really does not know when to shut up.  And finally, we have Cary (the scene-stealing Jason Patric), as the successful, attractive bachelor. In the first third of the film, Cary’s nonchalant boasts of misogyny and sexual predation appear to be puffing, but as the film progresses into the second half, we learn that what is true is truly disturbing. 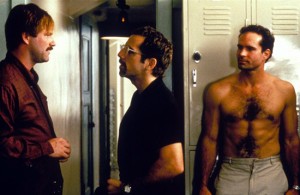 SCENE: Just three guys talking about the best sexual conquests they ever had

The one “normal” character thrown into the mix is the artist’s assistant, Cheri (Natassja Kinski), whose appearance in a repeating scene not only marks each chapter of the narrative but reveals something fundamental about each of the main characters.  The presence of Cheri also repels the notion that LaBute’s view of the world is wholly nihilistic (notwithstanding the punctuations of a score of Metallica songs performed by cellos).

Friends are not as close as they are portrayed in most films. Neighbors are not what they appear to be on the surface.  But as unrelentlessly scathing as LaBute’s dialogue is (echoing David Mamet at times), in 40 years on this planet, I have known individuals eerily similar to Cary, Mary, Barry, Terri, and Jerry (in some cases, right down to their professions), and nobody has portrayed these members of humanity on film with such brutal honesty, for better or for worse.

Todd Solondz’s debut, Sundance Film Festival darling Welcome to the Dollhouse, also made big waves in 1997.  And like LaBute, Solondz’s films of this century (Storytelling (2001), Palindromes (2004), Life During Wartime (2009), and Dark Horse (2012)) have not garnered nearly the critical success.

Solondz’s second film, Happiness (1998), was refused by Sundance only to win awards from Cannes and the National Board of Review.  To understate the matter, the film is even more of a challenge to laugh with, as it digs even deeper and wider into the recesses of human psychology and sociology.  While expanding the thematic subject matter of American filmmaking beyond the taboo, it also plays as effective satire of (among other things) mainstream movies – from its first scene (the break-up) to its last (the coming-of-age moment).  Indeed, I always thought that the film worked well enough as a sardonic take on the intersecting-lives-gives-meaning-to-human-existence subgenre (e.g., Grand Canyon (1991)) that just keeps recycling itself (e.g., Crash (2004)). 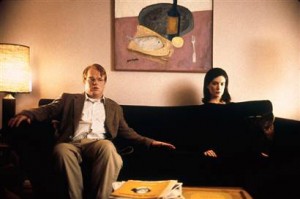 SCENE: In a fortuitous turn of events, Helen receives a call from a stranger who truly understands how she feels

But with what has to be among the most brave performances of any actors of the decade, Solondz takes off the proverbial gloves to present a plot involving Trish’s husband and son, Bill Maplewood (Dylan Baker) and Billy (Rufus Read). The scenes between them are conspicuously accompanied by a score you would expect to hear in a heart-warming G-rated family drama circa 1960. But the subject matter of their father-to-son conversations could not possibly be farther from the conventional.

Notwithstanding the dramatic/comedic depths to which Solondz plunges, even his most vile and pathetic characters have a moment of actual or attempted contrition.

Among my top 100 of all time, Happiness might just be the last film on that list I would ever recommend to anyone.  The limits of your sense of humor and what you consider to be narrative fair game will be tested.  But as with Your Friends & Neighbors, the film is not intended to merely induce uncomfortable/muted laughter (or worse, to be shocking for its own sake).   Ranking Happiness in his top 5 films of 1998, Ebert concluded, “In a film that looks into the abyss of human despair, there is the horrifying suggestion that these characters may not be grotesque exceptions, but may in fact be part of the mainstream of humanity.”

Expressing an appreciation (or lack thereof) for all sorts of films for over 25 years.
Previous: Christopher Nolan’s Dark Knight Trilogy
Next: Compliance (2012)