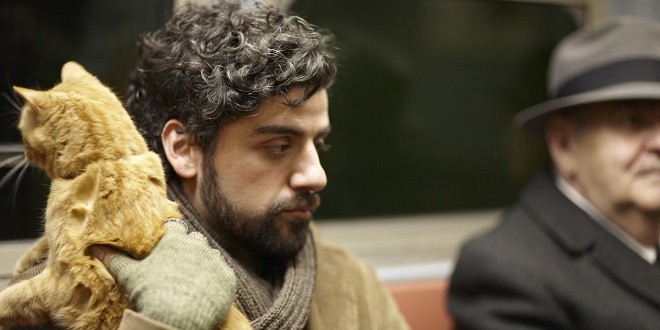 With only the slightest bit of soft focus, writers/directors Joel and Ethan Coen take us back to the Greenwich Village folk scene circa 1961 to get Inside Llewyn Davis.  Solo singer/guitarist Llewyn (Oscar Isaac) finds himself with one foot in the future and one foot in the past.  As a sad wanderer, he is acutely attuned to the freedoms and troubles of a changing world (soon to be expressed by Bob Dylan and the other singer-songwriters); but his talents and propensities (performing traditional folk songs) are not suited to the commercial realities of that changing world, as he is doomed to not quite subsist in small clubs alongside the turtlenecked folkies. 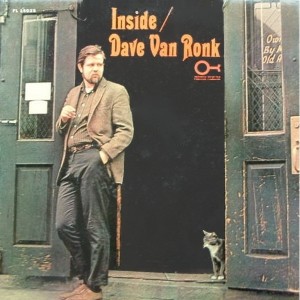 Much has been made of the film’s connection to the “Mayor of MacDougal Street,” Dave Von Runk.  The press is reigniting a posthumous career, as NPR just cannot say enough about this “real-life” Llewyn Davis.  But make no mistake – Inside Llewyn Davis is no biopic.  The intent of tying this film to a particular time is evocation, not documentation.  For example, although the cover of Llewyn’s eponymous record looks exactly like Inside Dave Van Ronk (1963) (pictured left), no actual songs from Von Ronk’s record appear on the soundtrack.  The Coen brothers even write their own period-appropriate version of a Goldcoast Singers pop song for a scene involving Llewyn as a singer/guitarist for hire (“Please Mr. Kennedy”).

Inside Llewyn Davis is redolent for the right reasons – not to invoke nostalgia, but to set the table for thematic exploration within a parallel universe.  In this sense, the film is no less existential than the Coens’ own A Serious Man (2009) (to the point where Llewyn equates getting a day job to “just exist[ing].”)  At one key moment, the viewer fully expects Llewyn’s character to quite literally turn right into another film – one that adheres to the principles of Screenwriting 101; but for better or for worse, Llewyn never strays from the road less traveled.  Ultimately, the narrative has no beginning, middle, or end – rather, as bookended by a single performance of the blues number, “Hang Me, Oh Hang Me,” Inside Llewyn Davis is but a cycle in the Sisyphean toil of an artist we rarely see.

As such, the performances take on a heightened importance within the film’s muted tones.  Although graced with a strong supporting cast who could also carry the tunes (including Carey Mulligan and Justin Timberlake), the success of the film on its own terms rests almost entirely on Isaac’s shoulders.  When all is said and done, the sober-eyed Isaac adeptly carries the burden of a character whose complexity is more philosophical than psychological.

All that said, like No Country for Old Men (2007), Inside Llewyn Davis is not an easy film to process – much less assess – on the first go-around.  Some lingering in the subconscious may be required.

Expressing an appreciation (or lack thereof) for all sorts of films for over 25 years.
Previous: Some Velvet Morning (2013)
Next: She Said: Top 10 Films of 2013