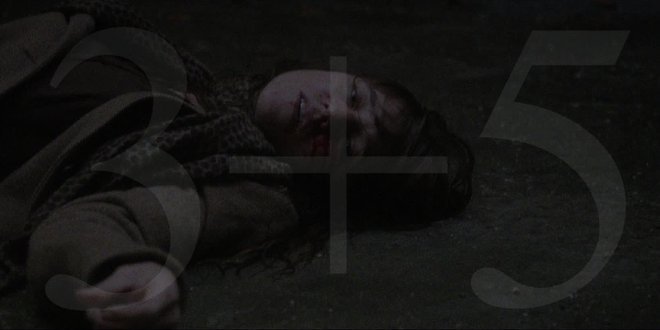 Posted by: Steven on April 5, 2014 in Movie Reviews Leave a comment

First thing’s first.  Director Lars von Trier’s most recent opus Nymphomaniac, as episodic as it is, is a single and singular film.  The split into “Vol. 1” and “Vol. 2” is entirely arbitrary and pragmatic, accommodating the obvious limitations of an average theater’s scheduling and an average audience’s attention span.

Appropriately perhaps, Nymphomaniac begins in an alley with a modest middle-aged man, Seligman (Stellan Skarsgård), finding Joe (Charlotte Gainsbourg), beaten and barely conscious.  When she rebuffs his offer to call the ambulance or the police, he decides to take her in for some tea and sympathy, upon which she is prodded to relate how she came to the self-diagnosis that is the title of this film.

On one level, this eight-chapter Story of Joe is simply an example of a relatively common narrative device in the history of film and literature – that is, profile a character who experiences a thematic element at the extremes to pose more universal questions about our own personal and societal relationships with that underlying element.  So within Nymphomaniac, von Trier represents sex as rebellion, sex as communication, sex as self-degradation, sex as a weapon, and most obviously, sex as a drug.  “Fill all my holes,” pleads Joe on more than one occasion.  But all snickering aside, we all have holes to fill.  And for Joe, “love” is nothing more than lust + jealousy, an idea for which von Trier makes an intellectually and emotionally honest argument – not just in the obvious ways, but in the subtleties (such as a mother’s glance at her daughter as her father lays dying).

Then there is another level – a distinctly reflective surface – to Nymphomaniac that reveals von Trier at his most expository.  In this sense, the much publicized graphic sexual depictions are the red herring; the framing strory is the real provocation.   From the promotional materials, Nymphomaniac offers little appeal for the red state metroplexes and little in the way of titilation to the average mainstream horndog.  So to von Trier, Seligman serves as a proxy for a significant portion of the film’s audience – or more pointedly, a certain brand of liberal intellectual.  With the preface to each chapter in Joe’s story, Seligman is desperate to use his knowledge of philosophy, religion, history, politics, literature, and art – straining to find metaphors – in order to somehow contextualize and legitimize humankind at its most unholy, its dirtiest, its most real.  But his ability to elucidate on the zen of fly-fishing, the polyphony of Bach, or the correct brand of gender politics does not mitigate the fact that he is no less an animal than any other human being, inextricably tied to the basest of instincts.  For all of Joe’s indulgences – and perhaps, because of them – she does not pretend to be someone she is not.  So notwithstanding the title of the film, von Trier’s ultimate indictment falls upon Seligman, whose true nature is masked by a smug pretense of empathy and careful choice of language.  Hypocrisy, thy name is political correctness.  And as far as von Trier is concerned, the well-educated elites on the left are just as uptight about fornication as the puritans on the right.

But even on his own terms, not all of von Trier’s choices work.  While there are more than a few jarring moments in Nymphomaniac, casting should not be among them.   The shifts from “young Joe” (a 23-year-old Stacy Martin) to “old Joe” (a 42-year-old Gainsbourg), and from her young lover Jerome (a 27-year-old Shia LaBeouf) to his older counterpart (a 47-year-old Michael Pas), are inexplicably distracting.  And the film’s cohesion (such as it is) conspicuously degrades in the eighth and final chapter, as if von Trier ran out of ideas on the last stretch of road to a premeditated conclusion.

A film marketed as “Nymph()maniac,” which supposedly rounds out an unofficial “Depression Trilogy,” is clearly not going to be everyone’s cup of tea.  Optimism is simply not in von Trier’s playbook.  But like his prior two films (including Antichrist (2009) and Melancholia (2011)), it is certainly thought-provoking enough to take a look – even if it has to come from behind the hands covering your face.

[Edit:  Although the same fundamental weaknesses exists (as discussed above), the unedited director’s cut is the more fully-realized work, particularly in terms of the metatextual elements.  Specifically, there is an essential abortion sequence late in the unedited film that is followed by the most revealing of debates between Joe and Seligman – an unfortunate cut from the theatrical release, but understandable given the graphic nature.]