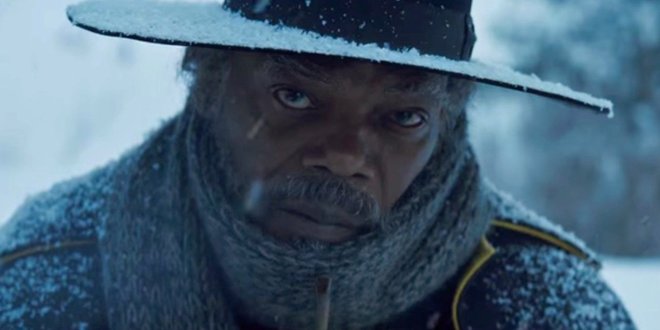 Posted by: Steven on December 26, 2015 in Movie Reviews Leave a comment

The booklet that came with a ticket to the 70mm “roadshow” of The Hateful Eight dubs it “The 8th Film by Quentin Tarantino.”  I would dub it “The 5th Film of Bloody Revenge by Quentin Tarantino” – yet another entry in a series that has come to define Tarantino’s mashup of influences as a franchise unto itself, as well as a discrete regression into the relative artistic safety of fixed expectations.  At this point in my own history with Tarantino (which began with taking in Pulp Fiction (1994) on opening night), I don’t know what’s become more excruciating – the increasing bloat in run times or the increasing degrees to which Tarantino apologists will bend over backwards to sell the sameness as greatness.

Alright, for the sake of argument, I will play along.  What do we have in this chamber Western that’s unique?  Instead of aping Ennio Morricone scores, Tarantino has hired him compose (an aspect flaunted in the official “overture” that precedes the 70mm screenings); and yet of all of the films Morricone has scored, curiously enough, this film owes as much of its visual and narrative atmosphere to John Carpenter’s The Thing (1982) as to the spaghetti Westerns.  But true to Tarantino form, Morricone isn’t always there to be Morricone – in fact, the score gets all Bernard Herrmann, as Tarantino goes all Alfred Hitchcock, in the opening salvo following the 70mm screening’s intermission.

And to be sure, The Hateful Eight has certain signature charms.  Tarantino has a great eye (even if the lingering seems to become more and more of an indulgence with each film).  As always, the cast is solid: Jennifer Jason Leigh is clearly having fun as the demonic gang member Daisy; and Samuel L. Jackson, as the Union major turned bounty hunter Marquis Warren, is always entertaining meting out his own brand of justice.  (For the best 2015 Western featuring Kurt Russell, however, I would recommend Bone Tomahawk.)  And then there’s the game of filmspotting that comes free with every Tarantino movie. (e.g., We might expect the setup from Rio Bravo (1959) that kicks in at chapter 3, but what about Stagecoach (1939) thing that opens the film?  Oh, Tarantino, we know how much you hate John Ford, you cheeky devil!)

But the wealth of commonalities with his prior four films persist, and to adjudge The Hateful Eight, one must ask what Tarantino is really trying to do with these films.  I don’t particularly mind the level of violence that has come to characterize the Tarantino franchise.  But with Inglourious Basterds (2009) and Django Unchained (2012), it seemed to me that Tarantino was trying to have his cake (appeal to the most prurient interests in the audience) and eat it too (if all the Nazis and white supremacists get what they have coming in the end, then it’s all good), as if there is still some sort of Hays Code lingering in the collective psyche to be manipulated.  In the case of The Hateful Eight, the balance seems to have tipped toward the cake-having end of the equation, notwithstanding Major Warren’s righteous racial anger.  For example, when Daisy gets smacked around a lot for being the uppity bitch that she obviously is – e.g., by repeatedly referring to Major Warren as a “nigger,” it feels like nothing more than provocation for provocation’s sake.  And when there is no underlying philosophical, moral, social, or political inquiry or purpose to the violence (other than to pose the rather dubious question of whether it’s worse to be a racist or a misogynist), what we have left is sheer exploitation.  (At my packed screening, the only discussions I overheard as we filed out consisted of 20-something males drooling over the kill scenes.)

Fine.  So how does The Hateful Eight hold up as an exploitation film?  With the only questions ultimately maintaining the suspense over the course of 3 hours being (1) how many of the said hateful will be dispatched and (2) how, not very well.  And therein lies the most damning criticism: all that cool Tarantino shit eventually gets pretty damn boring.

Expressing an appreciation (or lack thereof) for all sorts of films for over 25 years.
Previous: Star Wars: The Force Awakens (2015)
Next: He Said: Top 10 Films of 2015