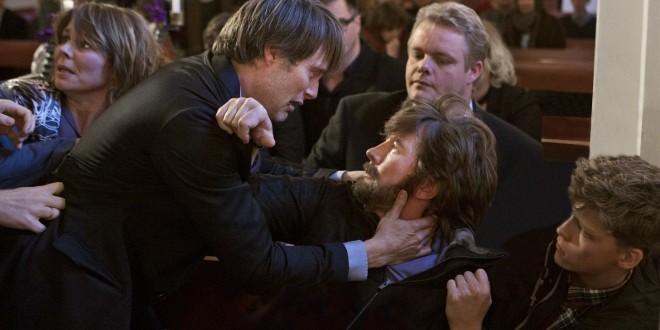 In the West, we generally define innocence as freedom from guilt of a particular crime, and we take a certain pride in a legal presumption of innocence – the idea that given the difficulty of proving the negative, an accused is considered innocent until proven guilty by sufficient evidence of probative value.  But here in the West, we also harbor a seemingly innocuous myth known as the Innocence of a Child – the notion that children are free from the sinful maladies of jealousy and deception and the poisonous fruit of sexual knowledge.  It is a sociological construct that the proverbial village will do anything to uphold and protect.  In The Hunt, Danish director/co-writer Thomas Vinterberg and co-writer Tobias Lindholm bravely explore the disconnect between a society and its legal ideology and the unfortunate consequences of placing Innocence above innocence.

Lucas (Mads Mikkelsen) is a kindergarten teacher who takes genuine joy in caring for his students.  The boys and girls await to bombard him each day he arrives at the school.  To Lucas, no child is left behind – including Klara (Annika Wedderkopp) – the daughter of his best friend, Theo (Thomas Bo Larsen), who is trying to avoid domestic squabbles at home.  But for Lucas, no good deed goes unpunished.  And when Lucas signals to Klara that he will not treat her any differently than the other children, the imaginative and injured Klara mentions to the schoolmaster (Susse Wold) a part of Lucas’ anatomy of which no child should have knowledge.  After an adeptly written and performed interview/interrogation of Klara by a school official, any modicum of healthy skepticism falls prey to a right-intentioned/wrong-headed inclination to “always believe the children.”

As expected, the toll that this hunt takes on Lucas and his son, Marcus (Lasse Fogelstrøm), is tragic.  But to those of us who have grown accustomed to Hollywood’s after-school special approach to the subject matter, what is unexpected is that the filmmakers and the cast never steer clear of emotional complexity by manufacturing melodrama or dehumanizing the characters into types.  In The Hunt, there is no Abigail Williams, Reverend Parris, or Judge Hathorne.  The only villain is a shadowy coward whose face is obscured by the sun at his back.  The only villain is fear.

In a film that is so carefully constructed not to feel carefully constructed, the only misstep might be the epilogue.  By sacrificing the perfect emotional beat to end the film for the sake of punctuating the film’s metaphor, it feels as though the screenplay was written backward from that point.  Nonetheless, The Hunt is simply not to be missed.

Expressing an appreciation (or lack thereof) for all sorts of films for over 25 years.
Previous: Only God Forgives (2013)
Next: Fruitvale Station (2013)