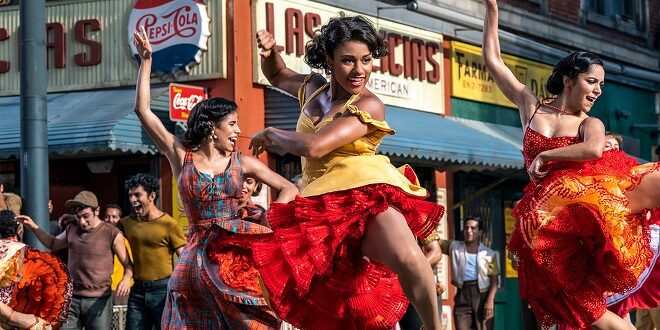 Posted by: Steven on January 10, 2022 in Other Stuff Leave a comment

10. West Side Story.  As a child of cable TV in the ‘80s, there are two musicals that were on heavy rotation in my household: West Side Story (1961) and Grease (1978).  Whatever the nostalgia factor, remakes really aren’t my jam.  But a casual choice for holiday viewing at the local multiplex yielded the most pleasant surprise of the year: director Steven Spielberg and screenwriter Tony Kushner have found the optimal balance of renovation and reverence in tackling this six decade-old Oscar-sweeper, which is about as beloved as it is reviled at this point in our cultural history.  Beyond the obvious choices (e.g., replacing the brown-face makeup for ethnically appropriate casting, changing the comically offensive language of “America”), the placement of one song-sequence has been moved to its original spot in the theatrical script (adding a sense of dramatic irony) and the performance of “Somewhere” has been reassigned to a new character (enhancing both the heartbreak and hopefulness of the tune). Remakes tend to generate a certain ambivalence for good reasons, but I think critic Michael Phillips summed it up best: you can debate with it, you can argue with it – but it is alive.

9. Summer of Soul (… or, When the Revolution Could Not Be Televised).  Contrary to what you may have read or heard, this documentary of “Black Woodstock” (the summer-long Harlem Cultural Festival of 1969) isn’t just for black historians and virtue-signaling critics; it can be enjoyed by anyone who has a love for popular music of the era.  The quality of the previously unseen footage and unheard soundtrack is remarkable enough to earn a place among the best of the genre.  But as a fan of The Beatles who recently labored through Peter Jackson’s Get Back, I submit that the most impressive attribute of this feature debut by musician/author-turned-director, Ahmir “Questlove” Thompson, lies in what Stanley Kubrick characterized as the core art of cinema itself: editing.  With bookends that coyly reference Gimme Shelter (1969), Questlove not only compiles countless hours of raw material into a smooth and singular episodic narrative, but (aside from thankfully brief appearances by Lin-Manuel Miranda and Chris Rock) limits the commentary to the actual performers and attendees – a choice that makes Summer of Soul already feel like a timeless classic.

8. The Father.  Rarely is source material written for the stage so enhanced by its translation to film as this feature debut by co-writer/director Florian Zeller, which transports the viewer into the perspective of a man gradually falling deeper and deeper into the hellish grasps of dementia (Anthony Hopkins, earning his Oscar).  I happened to make the rewarding choice of taking this in without having read anything about the production background, which meant that I was left as uncertain of, as I was unnerved by, the big things and the little things that change in the protagonist’s diminishing world.  And although I realize that I am really not doing a very good job of selling this film by saying so, I have never been left so fearful of a possible future.

7. Pig.   The power of subverting expectations may very well be a recurring theme of my top 10 of 2021.  In my estimation, the art of Pig starts with casting Nicholas Cage as a mysterious hermit hell bent on seeking the return of his stolen truffle pig, which invariably creates certain expectations in the audience—in terms of tone and energy—that (aside from one brief moment) are designed to be undermined.  Add to that the philosophical conversations—about purpose, grief, and the burden of memory—that first-time writer-director Michael Sarnoski seems to be having with films as divergent as Fight Club and The Rover.  Pepper in the setting of a culinary underground (which plays like a surreal dramatic rendering of a Portlandia skit), and Pig turns out to be the most unexpectedly sublime concoction of 2021.

6. Annette.  Yeah, Annette is a ridiculously rendered love-gone-wrong opera.  And sure, given the choice of perspective at work, it is also a controversially constructed critique of toxic masculinity.  But I thoroughly enjoyed it, and the two primary reasons that I have to put Leos Carax’s latest provocation on my top 10 are: (1) how it begins; and (2) how it ends.

5. The Green Knight.  Picture a man-boy, who had lived with his mother just a tad too long before finally leaving the nest, just rediscovering his Willow action figures – it’s not exactly what one would envision as the self-inspiration for writer/director (David Lowery) in creating what has been called the most “baffling” film of the year (https://www.vox.com/22585318/green-knight-explained-ending-spoilers-girdle-winifred-temptation).  But the irony does reveal an admirable lack of pretension, notwithstanding the number of dismissals to the contrary on social media and think pieces generated since its summer release.  Get beyond all of the mysterious motifs, cryptic colors, multiple meanings, and elusive evocations, and this adaptation of the 14th Century poem, Sir Gawain and the Green Knight, works quite well (if not best) as a simple, non-ironic ode to honor—to be distinguished from glory—delivered at a time when honor is in pretty short supply.

4. Saint Maud. “Never waste your pain” is the line of narration that probably best sums up this character study of Katie/Maud (Morfydd Clark) – a live-in hospice nurse and recent devotee to a non-denominational, William Blake-ish faith who attempts to save the soul of a terminal dancer and “minor celebrity,” Amanda Köhl (Jennifer Ehle).  The ultimate questions posed by this piece are certainly open for interpretation (e.g., are the saintly lonely because they are spiritual or spiritual because they are lonely), but the ultimate visual approach to this most recent entry into the quasi-horror canon of A24 is subjectivety: think Repulsion (1965), The Exorcist (1973), Carrie (1976), and Edvard Munch, and you’re in the ballpark (even if the game isn’t exactly what you may expect).  That said, writer/director Rose Glass’ work here is but my own subjective choice among three outstanding 2021 debuts by women who exhibited both a refreshing lack of restraint and an impeccable level of craft in tackling, um, let’s say “difficult” female characters.  (See also Rebecca Hall’s Passing and Maggie Gyllenhaal’s The Lost Daughter.)

3. The Power of the Dog. The older I get as a filmgoer, the more I value a unique experience in the cinema; theme, subtext, and the like become less of an attraction.  And I am certainly not an aficionado of writer/director Jane Campion; but from what I have experienced of her oeuvre (in particular, The Piano and Top of the Lake), she seems to take an almost impish pleasure in subverting the expectations of the audience in ways that go beyond genre and the like.  As such, The Power of the Dog could certainly be characterized as a Western, but that could mean just about anything.  Even so, as my own expectations were pushed and pulled into the second act, my emotional self was firmly immersed in places like Brokeback Mountain.  Suffice it to say (spoiler alert), that is not where this film goes.  And so the magic of this cinematic experience is that there is no magic, no sleight of hand in terms of the plot or the words being spoken: the signs were all there (from the text of the narration right down to the anxiously swelling fiddles in the score), but some part of me just did not want to see them.  And Campion knows that.  Dammit, I know she does.

2. Mass.  The conceit of Mass seems so contrived for melodramatic effect: several years after a school shooting, the parents of a victim have a sit down with the parents of the perpetrator.  But from the establishment of the artfully nondescript setting (a conference room in the annex of a small-town church) in the first 10 minutes to the violently mixed emotions of the four searching souls who will occupy that space for the remaining 90, Kranz—whose subtle hand in capturing what is essentially a one-room, one-act play—never allows us to settle into one mode for too long, be it heart-breaking, hopeful, or otherwise.  And Martha Plimpton and Ann Dowd turn in two of the most convincing performances of the year.  Everything about this piece rang truer than any narrative film that I saw in 2021.  But judging from the limited number of commenters who I follow on letterboxd who have actually seen this critically lauded film, I have to ask, with all due empathy, how much verisimilitude do we really want in our single-sitting, home theatre consumption right now?

1. Red Rocket. Truth be told, I am decidedly mixed on writer/director Sean Baker’s prior work (liked Tangerine, loathed The Florida Project); but I could never deny the uniqueness of his voice, his unyielding devotion to stories about “the ‘least’ amongst us” (to borrow a phrase from a nun in grade school) on their own terms, devoid of any socio-political agenda.  As the storytelling in Red Rocket goes, Baker gives us nothing more than what would otherwise be the second act of a traditional narrative: a washed-up, 40-something porn star (Simon Rex) returns to his depressing shell of a town in rural Texas, re-shacking up with his should-be-ex-wife until he can scheme up some sort of comeback, which eventually takes the form of “managing” a not-quite-18, sex-positive donut-shop cashier (Suzanna Son) into, um, stardom.  In terms of neo-Neorealist humanity, however, Baker—and Rex and Son, in particular—give us so much more.  By just about any set of objective mores, our ostensible protagonist is reprehensible; but in the subtly hyper-real world that Baker creates, Mikey is so manically optimistic that we just cannot bring ourselves to hate him—much less look away—even while we hope that every other character steers clear of his trajectory for self-improvement.  And to this admittedly jaded cinephile, that is no small feat.