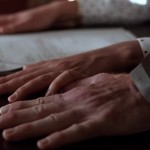 Spoiler Scale (How spoilery is this article on a scale of 1 to 10?):  5  In recognition of the holiday, this article is the first installment of four published in February 2013 highlighting my favorite love stories put to celluloid in the 21st century. Director Steven Shainberg has described his second feature film, Secretary, as a “black comedy coming-of-age” – at least on its ... END_OF_DOCUMENT_TOKEN_TO_BE_REPLACED