Tag Archives: Most Anticipated Movies of 2013 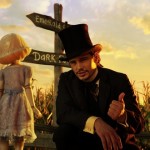 In all honesty, I cannot say that I am as optimistic about the films slated for release in 2013 as I was for 2012.  The cinemas will be full of more prequels and sequels than ever.  Apparently, the argument about whether to pump so much money into franchise films is over.  The only remaining disagreement seems to be over title conventions – should the powers-that-be go ... END_OF_DOCUMENT_TOKEN_TO_BE_REPLACED