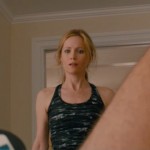 Spoiler Scale (How spoilery is this article on a scale 1 to 10?):  3   For his fourth film as writer and director, This Is 40, Judd Apatow plucks two of the more memorable characters from his second film Knocked Up (2007) – married couple Pete (Paul Rudd) and Debbie (Leslie Mann, Apatow’s wife) – who are both turning 40.  Things could be much better, financially and otherwise.  ... END_OF_DOCUMENT_TOKEN_TO_BE_REPLACED