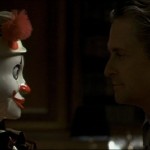 Spoiler Scale (How spoilery is this article on a scale of 1 to 10?):  8   In September 2012, the Criterion Collection released the director approved edition of director David Fincher’s The Game (1997) on BD and DVD.  The package features an essay by David Sterritt, Chairman of the National Society of Film Critics. Director David Fincher’s oft-forgotten The Game (1995) was notably released between his breakthrough hit, Se7en (1995), and the cinephile ... END_OF_DOCUMENT_TOKEN_TO_BE_REPLACED