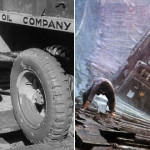 Spoiler scale (How spoilery is this article on a scale of 1 to 10?):  5   Although a veteran filmmaker, director Henri-Georges Clouzot (Les diabolique (1955), La vérité (1960)) realized his first commercial breakthrough by capitalizing upon the popularity of the novel by Charles Arnaud, Le Salaire de la peur (The Wages of Fear) (1950).  In notable contrast to modern adaptations (read: ... END_OF_DOCUMENT_TOKEN_TO_BE_REPLACED