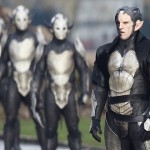 Spoiler Scale (How spoilery is this article on a scale of 1 to 10?):  3 Meanwhile, back in Asgard … In all honesty, if you have seen the first installment of the Thor subfranchise (Thor (2011)), you’ve pretty much seen Thor: The Dark World.  An evil-eyed baddie whose character development consists entirely of a four-minute of prologue (replace “Laufey” with “Malekith”) seeks vengeance against the Kingdom of Asgard, ... END_OF_DOCUMENT_TOKEN_TO_BE_REPLACED