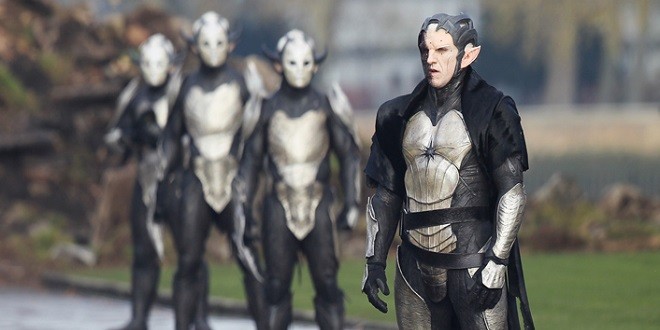 Posted by: Steven on November 8, 2013 in Movie Reviews Leave a comment

Meanwhile, back in Asgard … In all honesty, if you have seen the first installment of the Thor subfranchise (Thor (2011)), you’ve pretty much seen Thor: The Dark World.  An evil-eyed baddie whose character development consists entirely of a four-minute of prologue (replace “Laufey” with “Malekith”) seeks vengeance against the Kingdom of Asgard, the policemen of the “Nine Realms,” by re-acquiring some all-powerful relic (replace the “Casket of Ancient Warriors” with the “Aether”) with the assistance of hordes of trolls (replace the lanky “Frost Giants” with the teletubbie-ish “Dark Elves”).  As before, the crown prince of Asgard, Thor (Chris Hemsworth), disobeys daddy Odin (Anthony Hopkins) to do what is right; and Thor’s kingdom-hungry brother, Loki (Tom Hiddleston), returns to make mischief.  Got it?

Yet even assuming that all of this is a good thing that you cannot get enough of, within a few minutes into Thor: The Dark World, you may find yourself scratching your head.  For example, wasn’t the Bifrost (the rainbow bridge between Asgard and all Nine Realms) destroyed?  But frankly, questions like this are of little concern to director (and Game of Thrones alumnus) Alan Taylor and the committee of five who claimed screenplay and story credits.  It seems that the safety of familiarity has replaced the need for continuity.

Indeed, the only notable change between the two films is the tension is between the (allegedly) lovelorn demigod and the weak-in-the-knees astro-physicist Jane Foster (Natalie Portman).  Jane really gets no respect.  Not from Thor (who returned to Earth to team up to save New York City/eat some shorma with his buds in The Avengers (2012), but could not even be bothered to pick up the phone).  Not from S.H.E.I.L.D. (which assembles the Avengers for Earth-threatening mayhem, but cannot even return a phone call when the existence of the entire universe is in jeopardy).  And not from Joss Whedon (who certainly didn’t want to infect The Avengers with the worst onscreen chemistry in modern franchise films).

Without going too far down the rabbit hole, the most damning problem of Thor: The Dark World is exemplary of the worst aspect of the Marvel Studios Avengers superfranchise:  stakes (as in, the utter and complete lack thereof).  About an hour in, one inevitably wonders:  Are the protagonists ever in any real danger?  And if so, when and how?  Which characters can be stabbed, impaled, slammed against a wall, etc. with or without deleterious effect?  Does it matter who is doing the stabbing, impaling, or slamming?  A seven year-old boy named Casey sat behind me at my screening (as I came to learn in the 10 minutes before the previews started), and without disclosing any details of the twisty ending, I can attest that at the key moment, he yelled out, “Oh, come on!”  Indeed, Casey.  Indeed.

How can the filmmakers of a fantasy movie be so blithely unconvincing in selling their own universe?  Perhaps the folks at Marvel wants us to pick up the comic books to figure it all out.  And that brings us to what must be the real cynical purpose behind Thor: The Dark World:  give the masses a new movie – any movie – every nine months or so to keep the tent from touching the ground until the next assembly of Avengers.  And for the love of all that’s green and gold, please don’t go all Shane Black/Drew Pearce on Whedon – the man’s got an important job to do.

Expressing an appreciation (or lack thereof) for all sorts of films for over 25 years.
Previous: Blue Is the Warmest Color (2013)
Next: The Folly of the Bechdel Test Movie Rating

Black Swan (2010): A Portrait of the Artist as Narcissist