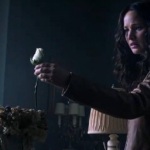 In one late scene in Mockingjay-Part 1, while confined to an underground bunker, Jennifer Lawrence’s now familiar action hero, Katniss, eyes a target and cocks her bow to test out a new arrow, but she is abruptly stopped by this franchise’s representation of Q (Jeffrey Wright), who warns “let’s not shoot those in here.”  That pretty much sums up this feature-length ... END_OF_DOCUMENT_TOKEN_TO_BE_REPLACED