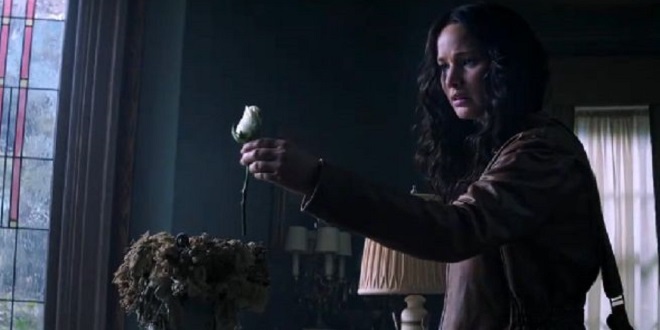 Posted by: Steven on December 12, 2014 in Movie Reviews Leave a comment

In one late scene in Mockingjay-Part 1, while confined to an underground bunker, Jennifer Lawrence’s now familiar action hero, Katniss, eyes a target and cocks her bow to test out a new arrow, but she is abruptly stopped by this franchise’s representation of Q (Jeffrey Wright), who warns “let’s not shoot those in here.”  That pretty much sums up this feature-length trailer for the next sub-installment of The Hunger Games series, due a year from now, for which we will be asked to pay yet another $10.50.

I seem to recall that when I and certain others over the age of 16 gave the first installment (The Hunger Games (2012)) a less-than-enthusiastic assessment due to its loud but shallow exercise in social critique that tended to reveal the limited scope of its true demographic, I remember there being a number of responses along the lines of “judge The Hunger Games as a sci-fi action film, not some indie drama.”  I mean, like, d’uh.  But reading the glowing reviews of this particular one-arrow flick, it seems like the series’ apologists tend to move the goalpost.  So now, apparently, Mockingjay-Part 1 is supposed to be appreciated within the context of another genre, or in the alternative, as one-half of one-third of a larger story that is only partly action-y.  Alrighty then.

That said, outside of a rousing speech in the middle of this two-hour film, our purportedly strong female hero cries, worries, and broods an awful lot about two men (the lauded anti-damsels in distress) – which I have a hard time believing she really cares about (notwithstanding the efforts of Lawrence) – on her very personal journey to discover what most viewers could have easily surmised 15 minutes in.  Instead of a plot worthy of its run time (regardless of whether it is supposed to be “episodic” or not), we get a lot of the propogandists propagandizing and love triangles triangulating; but even with said goalposts properly adjusted, more talk does not translate into more depth.  Sorry, Mark Kermode, but Mockingjay-Part 1 is no Network (1976) or Broadcast News (1987), and nor is it conveying any of the themes in any of those films in any new or interesting ways – not even close.  When all is said and done, what we really get is the most insipid of any major franchise release I have seen this year.

As advertised, Mockingjay-Part 1 is a movie about a rebellion; but the most relevant question it raises is whether we as viewers will ever rise up against the tyranny of modern franchising and stop feeding at the trough of these dramatically-diluted, predictably-padded milkings (Harry Potter, Divergent, The Hobbit).  Oh sure, there are always hardcore fans who will see anything with the brand on it – buy the lunch boxes, the trading cards, what not; but what is the excuse for the rest of us patronizing an industry that so criminally takes us for granted?  Is anyone up for an embargo of The Battle of the Five Armies?

Expressing an appreciation (or lack thereof) for all sorts of films for over 25 years.
Previous: The Battle of the Invasions of the Body Snatchers!
Next: My Favorite Film of 2014: Whiplash