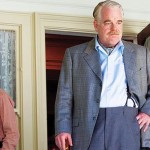 Spoiler Scale (How spoilerly is this article on a scale of 1 to 10?):  3   Some members of the film critic world have dubbed writer/director Paul Thomas Anderson the new Kubrick, and with five years passing since the release of his last film, The Master is easily one of the most anticipated films of this year.  Anderson’s unlikely romantic comedy Punch-Drunk Love (2002) marked a transition away ... END_OF_DOCUMENT_TOKEN_TO_BE_REPLACED