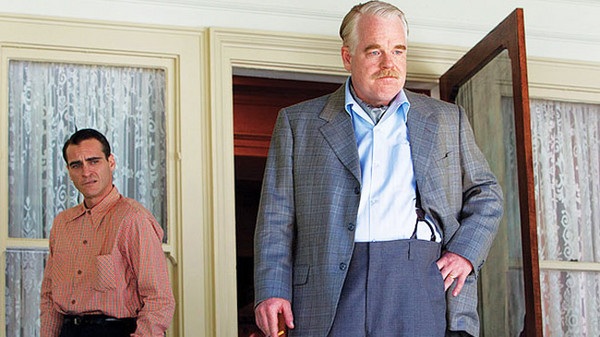 Posted by: Steven on September 21, 2012 in Movie Reviews 7 Comments

Some members of the film critic world have dubbed writer/director Paul Thomas Anderson the new Kubrick, and with five years passing since the release of his last film, The Master is easily one of the most anticipated films of this year.  Anderson’s unlikely romantic comedy Punch-Drunk Love (2002) marked a transition away from the sprawling ensemble pieces that first put him on the map (Boogie Nights (1997), Magnolia (1999)).  And now it seems that There Will Be Blood (2007) started a new trend in his oeuvre – films that center around a single character, a force of nature, who just refuses to arc.

Contrary to its title, The Master actually focuses on Freddie Quell (Joaquin Phoenix) – one of Tom Brokaw’s Greatest Generation who is just a few years out of WWII, drifting from job to job, and eager to do little more than indulge his inclinations for sex and homemade intoxicants (in tandem, if possible).  Freddie eventually crosses paths with Lancaster Dodd (Philip Seymour Hoffman), referred to as “Master” by the members of his burgeoning cult (the “Cause”), who is dead set on combating Freddie’s id with some superego.  (“We are not part of the animal kingdom, we sit far above that crowd.”)  It is the dance of dialogue between these two characters – and not any sort of conventional plot – that propels the film.

As both writer and director, Anderson is at the top of his game.  From the opening sequence of Boogie Nights, Anderson exhibited a penchant for an over-the-shoulder perspective from the Scorsese school of visual storytelling.  But Anderson’s style has evolved into something distinctive.  At times, the camera takes the perspective of a sauntering bystander perusing the action.  At other times during scenes of dialogue, the focus shifts hard from the foreground to the back – even to the point of moving off of the speaker, as if we are supposed to be distracted at times.

From The Master, we can rightfully expect multiple acting nominations come award season.  Phoenix’s physical performance is above and beyond the call of duty, always looking worn to a point well in excess of his 37 years and often assuming a posture that matches the stage of his character’s psychological evolution.  While it is easy to take Hoffman’s nuance for granted at this point in his career, the character of Charismatic Cult Leader would surely be overplayed in lesser hands.  And within a movie that oozes male pathos, Amy Adams stands out in her depiction of Lancaster’s nth wife, which is both quietly commanding and a touch unsettling in the sense that we never quite know whether she’s a true believer in Lancaster, the Cause, or both.

All that said, the whole is never greater than the sum of the parts.  I suspect that the subjective will inform much of each viewer’s experience of this particular film.  But if I must offer an objective explanation of why I found this film to be oddly uncompelling, it would have to be the choppy pacing.  For the stellar level of craft at work here, the series of scenes that make up this movie do not always fit well together.  The film’s sense of time often seems to get lost – particularly at the beginning and end of the film and in the flashback sequences – and not in a way that serves the narrative or the character development.  (Phoenix’s unchanging appearance doesn’t help matters.)  And where the ending of There Will Be Blood was a punch in the gut, the ending of The Master is just – well, unsatisfying.

On what is perhaps a related point, I cannot recall the last time that I saw so many scenes in the trailers to a film that were not actually in the released movie (e.g., “Just say something that’s true!”).  Is Anderson constructing the trailers to deliberately play with audience expectations?  Or is this a sign that the film was (over-)edited up to the last-minute?  On second thought, I probably don’t want to know the answer to that.

Expressing an appreciation (or lack thereof) for all sorts of films for over 25 years.
Previous: The Innocence of Muslims: The Trailer That Changed The World?
Next: Revisiting David Fincher’s The Game (1997)