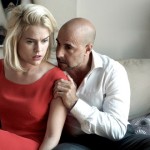 Spoiler Scale (How spoilery is this article on a scale of 1 to 10?): 3   Some Velvet Morning (presumably no relation to the band) is composed entirely of a single conversation between an escort, Velvet (Alice Eve), and her former john, Fred (Stanley Tucci), who has left his wife and shown up with his bags at her apartment.  Initially, the ... END_OF_DOCUMENT_TOKEN_TO_BE_REPLACED