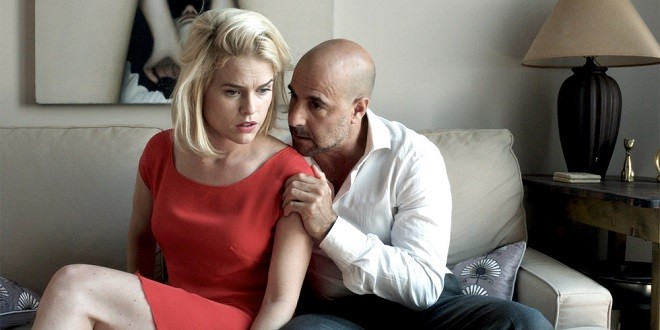 Posted by: Steven on December 14, 2013 in Movie Reviews Leave a comment

Some Velvet Morning (presumably no relation to the band) is composed entirely of a single conversation between an escort, Velvet (Alice Eve), and her former john, Fred (Stanley Tucci), who has left his wife and shown up with his bags at her apartment.  Initially, the setup suggests that Some Velvet Morning was originally conceived for the stage (writer/director Neil LaBute has written/produced about 20 plays), but this was not the case; rather, his intentions were purely cinematic.  Specifically, LaBute seems to be taking his own swipe at the likes of Before Sunset (2004) and Certified Copy (2011).

In the first act, Eve seems uncomfortable in the role (e.g., what to do with her hands), although one could certainly argue that she redeems her performance later on.  Tucci, fresh off his unsettling appearance in The Hunger Games: Catching Fire (2013), manages to cycle adeptly between the intellectual, the creepy, and the pathetic.  As is typical for LaBute, the whole affair puts the viewer at varying degrees of unease; but with a runtime of 82 minutes, he also knows better than to overstay his welcome.  That said, not all of the talk works, even on its own terms; but the writing is good enough to warrant sticking around for the final punch in the gut.  The less one knows about the ending going in, the better; but suffice to say, LaBute is not looking for agnostics.

Be forewarned, gentle viewer.  Some Velvet Morning is a return to form for LaBute – along the lines of In the Company of Men (1997), Your Friends & Neighbors (1998), and The Shape of Things (2003) – following a curious and disappointing stint as director-for-hire (The Wicker Man (2006), Lakeview Terrace (2008), and Death at a Funeral (2010)).  LaBute’s examinations of sexual politics and language have always precipitously straddled the fence between the darkly comic and the misanthropic.  (See “How Dark Should a Dark Comedy Be?”)  The men never seem able to engage in any form of intimacy that does not involve sex or any form of communication of that does not begin with sexual attraction; and the women do not fare much better.  It’s all just oil and water, and perhaps, that is the way of the world.  But at the risk of making the understatement of the year, Some Velvet Morning is no date movie.

Expressing an appreciation (or lack thereof) for all sorts of films for over 25 years.
Previous: My 10 Most Anticipated Films of 2014
Next: Inside Llewyn Davis (2013)