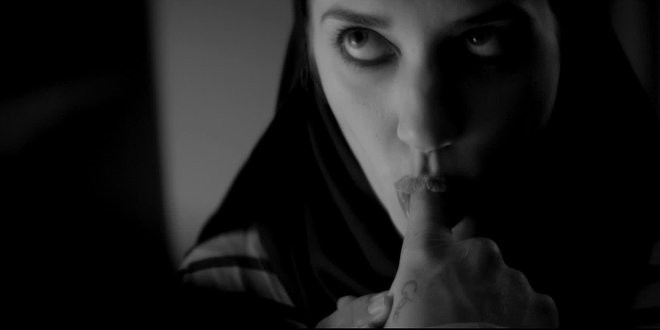 Posted by: Steven on April 26, 2015 in Movie Reviews Leave a comment

The young Man encounters the Girl on a sidewalk in the middle of the night and invites her up to his apartment.  The Girl’s shirt bears Jane Seeberg’s Breathless stripes, but it is partially covered by a chador – at once a symbol of gender repression and an approximation of a menacing cape/cowl.  The entrance to his apartment is flanked by the heads of vanquished animals.  The Man sits down on his couch and snorts some coke, nodding his head presumptuously.  The Man opens his briefcase next to his gun and starts counting the teaming stacks of cash.  The Man turns up the club music, picks up some dumbbells and does a few curls while eying the Girl.  The Man then approaches the Girl, slowly grooving with his sensual dance moves as he opens his shirt.  The Girl gazes at the Man’s tattoos with fascination – the one across his throat reads “sex.”  The Man is a pimp.  The Girl is a vampire.

It is a scene that epitomizes the strongest, most tantilizing aspects of the densely referential A Girl Walks Home Alone at Night – Iranian-American writer/director Ana Lily Amirpour’s feature debut.  Although comparisons to David Lynch and Jim Jarmusch have been bandied about, the most accurate reduction might be Robert Rodriquez, but with a soul – a distinctly feminist soul.

Undulating oil wells border the post-industrial landscape of Bad City.  (This film was actually shot in southern California.)  The recognizably modern setting, characters, and issues are subverted by timelessly rendered black and white cinematography and a wickedly divergent score.  Freedom is both a skateboard and a car on the open road.  And with a narrative rich in subtext, the beautiful beast who is the Girl (Sheila Vand) would seem to be as much as a consequence of her environment as an individual personality but for the love story that emerges with the James Dean-garbed Arash (Arash Marandi).

The ambition of first films can generate a wonderful sense of urgency and adventure, and in this case, there is a unique level of depth and color to what the 34 year-old Amirpour brings to the screen.  But at times, Amirpour’s more whimsical tendencies are pursued to the point of distraction.  In one particularly abrupt sequence, a transvestite or transgendered man (Reza Sixo Safai), dubbed “Rockabilly” in the credits, materializes to dance with a balloon in a musical interlude.  Why?  I am guessing that it is supposed to punctuate the prior scene with … well, the calculated quirkiness of it overwhelms whatever that purpose was supposed to be.  (From the BD extras, it appears that a number of scenes featuring Rockabilly – including a much longer version of the musical interlude – were excised.)

Notwithstanding a few missteps – or perhaps, because of them – Girl Walks Home is destined to join the ranks of the new cult canon, which is somewhat unfortunate.  As for Amirpour, who has purportedly been making horror films since the age of 12, I am already looking forward to her next film – a romance set in the Texas desert … with cannibals.

Expressing an appreciation (or lack thereof) for all sorts of films for over 25 years.
Previous: Revisiting The Thin Blue Line (1988) and Its Missing Pieces
Next: Mad Max: Fury Road (2015)