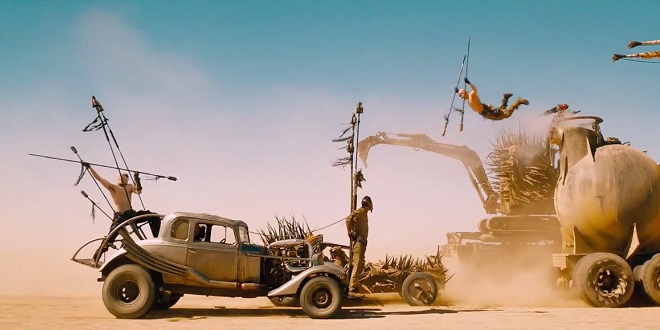 As the colon in the title suggests (see e.g., Bad Lieutenant: Port of Call New Orleans (2009)), George Miller – the original director of Mad Max (1979) – wants us to know that his new post-apocalyptic demolition derby is a “reboot” and not a “remake.”  I suppose that the argument could be made that the former is a more legitimate artistic endeavor than the latter, but whatever the differentiation, Mad Max: Fury Road leads the Hollywood capital to the same destination: franchise exploitation.  Truth be told, in my book, these primarily commercial exercises always start with a certain disadvantage – I mean, beyond the other implications of the colon in the title, there is a certain spoilery aspect to pre-release buzz that mentions the contractual obligations of the male lead actor to make multiple sequels – the first of which includes the name the other lead character in the title.  But I guess I am just old-fashioned that way – expecting stakes, even in my summertime fare.

In essence, Fury Road consists of one extended – albeit gloriously insane – chase sequence, but not much else.  Much has been made of the preeminence of the female lead character, Furiosa (Charlize Theron), vis-à-vis the once enigmatic Max (Tom Hardy) – the latter of whom seems to take the initial role as damsel in distress.  But this aspect represents part of a broader trend for the genre (e.g., Tom Cruise getting schooled by Emily Blunt in Edge of Tomorrow (2014); the female dino-baddy eating her brother to reign supreme in Jurassic World (2015)) – that is, shifting the gender of the bad-assery, but not much else.  (“What can we do to get more wives and girlfriends into those theater seats?” asks the studio exec.)  In the grand scheme of things, however, Theron and Hardy have little to do in terms of range or even dialogue, and although there might be some feminist subtext on the fiery surface of Fury Road, there’s not much beneath all the dusty gravel.

The curiously high level of critical acclaim thrust upon Fury Road may very well be the product of our lowered expectations in the Marvel Universe era of action flicks.  That is, studios and directors are doing less and less, with a more and more generic palette, to sell animation as live action.  So, for example, when the filmmakers of Edge of Tomorrow or Avengers: Age of Ultron (2015) go so far as to ape the aesthetics of first-person video games, it’s considered “surprisingly fresh” and “awesome” (as opposed to a cynical targeting of the genre’s most profitable demographic).  While certainly not devoid of CGI, Fury Road exhibits a far broader range of influences than its multiplex competition (grindhouse, Roland Emmerich, Cirque du Soliel, etc.), resulting in a far richer experience.  And to the film’s credit, Miller and company realize the distinction between the cartoonish and the theatrical.

Expressing an appreciation (or lack thereof) for all sorts of films for over 25 years.
Previous: A Girl Walks Home Alone at Night (2015)
Next: Revisiting Gimme Shelter (1970) and the End of an Era