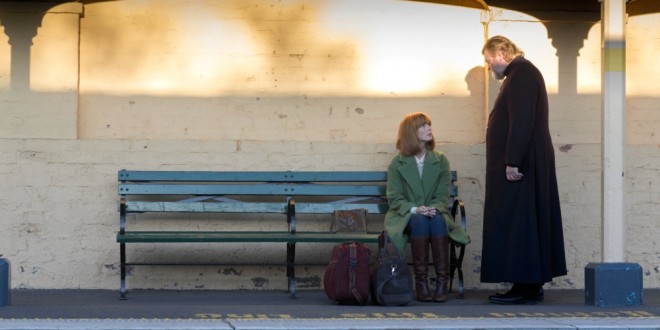 Posted by: Steven on August 18, 2014 in Movie Reviews Leave a comment

From its opening frame, Calvary jumps right into the void with an unseen male parishioner’s confessing, “I first tasted semen when I was seven years old.”  “Certainly a startling opening line,” remarks Father James (Brendon Gleeson), immediately setting the stage for this self-referential, black comedy.  Except Calvary is not exactly a comedy.

The confessor next declares that, as punishment for the sins of a deceased pederast priest, by the Sunday next, he will make a real statement by killing Father James – a “good priest.”  With the narrative time line established, the mystery begins.  Except Calvary is not exactly a mystery.

As the vicar of an Irish coastal village – a perfect vacuum (of sorts) for exploring the themes at play – the good Father navigates what may be his final days by tending to the day-to-day issues of a rogues gallery of sinners, as well as his own suicidal daughter visiting from the city (Kelly Reilly).  At times, the whole proceeding feels like a surreal passion play, with the Garden of Gethsemane taking place in a pub amidst a cuckold and his wife’s lover playing chess, a coke-head atheist surgeon, and a Buddhist wielding a baseball bat.  To be sure, Calvary is brimming with bone-dry gallows humor, drawing generously upon a distinct sense of Irish temperament in culture and literature.  But this only accentuates one of the strengths of the film – the specificity and pointedness of the fundamental question that writer/director John Michael McDonagh (The Guard (2011)) is proposing:  Just where is the long-standing relationship between Ireland and the bruised and beaten Catholic Church going?  And amidst a cast of characters, most of whom can be described as personifications of contemporary social factions and attitudes, Father James is given the most human face.  In doing so, McDonagh suggests that perhaps the strength of the Church lies not in its presentation and perception as a singular institution, but as an aggregate of its people.

Notwithstanding McDonagh’s boldly admirable intentions and Gleeson’s career-defining performance, Calvary is clearly not everyone’s pint of ale.  With its abrupt shifts from the dark to the light, and from the evolving arc to the randomly episodic, this film bucks and kicks as if actively trying to throw the viewer.  And even from the perspective of this fan, the ride is probably a bit rougher than it needs to be.