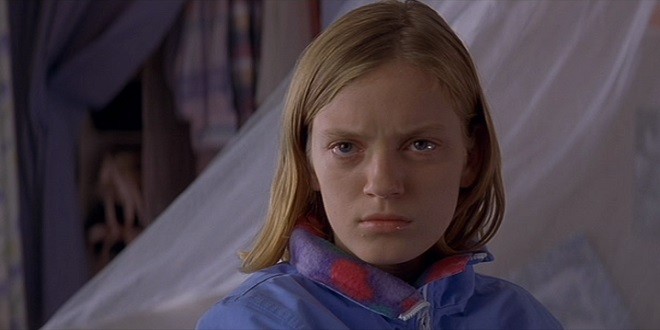 Posted by: Steven on August 16, 2014 in Film Essays Leave a comment

When, lo, as they reached the mountain-side,
A wondrous portal opened wide,
As if a cavern was suddenly hollowed;
And the Piper advanced and the children followed,
And when all were in to the very last,
The door in the mountain-side shut fast.
Did I say, all? No! One was lame,
And could not dance the whole of the way;
And in after years, if you would blame
His sadness, he was used to say, —
“It’s dull in our town since my playmates left!
“I can’t forget that I’m bereft
“Of all the pleasant sights they see,
“Which the Piper also promised me.
“For he led us, he said, to a joyous land,
“Joining the town and just at hand,
“Where waters gushed and fruit-trees grew,
“And flowers put forth a fairer hue,
“And everything was strange and new;

Although absent from the original novel by Russell Banks, screenwriter and director Atom Egoyan used the Browning poem to bring the fable-like quality of the source material to his cinematic adaptation of The Sweet Hereafter.  A fatal school bus accident leaves a rural Canadian town in shambles, and a Pied Piper arrives in the form of a lawyer, Mitchell Stephens (Ian Holm).

Of course, Mr. Stephens offers no evidence that anyone failed to do their job, much less engaged in any calculus to trade dollars for human lives.  To his mind, there is simply no such thing as an accident.  And to paraphrase the Buddha, anger is the end of striving for the truth and the beginning of striving for oneself.

To be sure, there are more specific themes at play in The Sweet Hereafter – the way lawyers conflate an incomplete record to create a desired narrative and the complexities of how a community reacts to a tragedy with its secrets buried in shallowest of graves.  But at its core, this quiet piece of cinema is an exploration of anger in its most palatable form – wrapped up in the cardinal virtue of justice.

“[A]nger is not really thought of in the contemporary religious West as that serious a problem.  It’s kind of like a natural phenomenon, like a storm or a bolt of lightning, and perhaps even rather respected as a male prerogative and a privilege of authority.  Women’s anger is perhaps more frowned on behaviorally, thought of as shrewish and historical.  Then there is righteous anger, against criminality and injustice, slackers and busybodies, luxury and destitution, which ranges from individuals to be punished to communities against whom there are crusades to be waged.  So some contemporary religious persons can strive to restrain anger as somehow morally and practically problematic, but somehow they also respect it, allow lots of uses for it, and consider it ultimately to be beyond full understanding and control, in the province of Nature or God.  They love it in the form of capital punishment, draconian prison laws, and crusading wars on drugs, terrorism, illiteracy, and so forth.”

But in the sense that Aristotle and Seneca both defined anger as “a burning desire to pay back pain,” Mr. Stephens is no Mephistopheles.  Rather, he is very much a human being – resentful in his impotence with the hand he has been dealt.

Within moments after his first meeting with the Otto family (above) in Egoyan’s nonlinear narrative, we find Mr. Stephens describing his relationship with his own daughter to a friend of the family.

Appropriately enough, however, the above-quoted portions of the Browning poem are narrated by Nicole Burnell (Sarah Polley) – a teen left paralyzed by the accident.  Nicole fails to follow the Pied Piper into the mountain – both in the more literal sense (as the “one [who is] lame”) and the metaphorical (as she ultimately pulls the rug out from Mr. Stephens’ mass litigation with her own act of wrath toward her father).  On a personal level, one could easily say that her father deserves what’s coming on a number of fronts, but that’s not really the point.  Her ultimate choice brings no equity, which would necessarily require a reckoning with the truth.  And whatever one’s views of divine retribution, indulgence in the sin will most certainly punish the sinner.

In the end, it is a service station manager, Billy Ansel (Bruce Greenwood), who is able to transcend.  At the time of the accident, he was dutifully trailing the bus, honking playfully at his two children.

It was a daily routine of doting by a parent who had already lost his wife which, in a twist of cosmic irony, forced him to witness the annihilation of all he had left to love.  If The Sweet Hereafter can be viewed as a proxy for biblical parable, then Billy would surely be Job.  And yet, he is the only one who refuses to satiate a rage that our society is most willing to forgive – when it is the product of grief over the loss of children.  When Billy finally does meet the lawyer, the conversation is short – “I can help you,” pleads Mr. Stephens.  “Not unless you can raise the dead.”  There is no balance to be achieved.  There is no moral perpetrator and no lesson to learn.  There is only the desire to inflict pain upon others in the impossible hope of dispensing with one’s own – to take the proverbial poison and expect someone else to die.

Expressing an appreciation (or lack thereof) for all sorts of films for over 25 years.
Previous: Life Itself (2014)
Next: Calvary (2014)