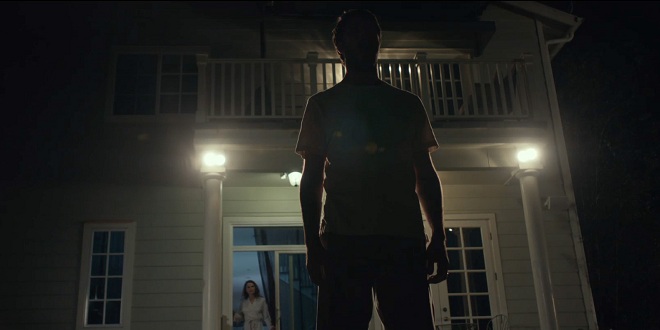 Posted by: Steven on March 4, 2013 in Movie Reviews Leave a comment

Why would aliens want to play Jenga with the contents of your kitchen cabinets?  If the answers to these sorts of questions are not necessary for you to suspend your disbelief, then Dark Skies may be right up your alley. On the other hand, if you prefer your horror movies to operate like a rollercoaster ride (i.e., delivering the proverbial bump in the night every 12 to 15 minutes), then Dark Skies may be a bit of a disappointment.

Visual effects veteran Scott Stewart first jumped into the director’s seat in 2009 with the rather inauspicious Legion.  His follow-up, Priest (2011), fared little better – commercially or critically.  With Dark Skies, Stewart has expanded into writing and directing, and surprisingly, the end result is almost entirely devoid of (conspicuous) CGI.  Nor does Stewart go completely overboard with the video footage perspective that has dominated the recent crop of the PG-13 class of horror films.  (Apparently, video cameras malfunction in the proximity of visiting aliens.)

All that said, the performances tend to elevate the material.  As the mother and the emotional center for the film, Keri Russell (The Americans) can invoke a certain something-beneath-the-surface dimension that works particularly well in a context where she may lose control of her faculties at any given time.  And J.K. Simmons’ take as the alien expert (read: victim) – more haggard than eccentric – is particularly refreshing.

As a whole, Dark Skies is an average horror film released in the midst of a weak movie season (e.g., Mama, The Last Exorcism-Part II).  But ultimately, Stewart’s attempt at a twisty ending – as audaciously dark as it is – falls flat largely because it feels unearned.  With about 20 minutes more Spielberg and 20 minutes less Paranormal Actvity, Dark Skies could have been an excellent entry into the subgenre.

Expressing an appreciation (or lack thereof) for all sorts of films for over 25 years.
Previous: Black Swan (2010): A Portrait of the Artist as Narcissist
Next: Lore (2013)