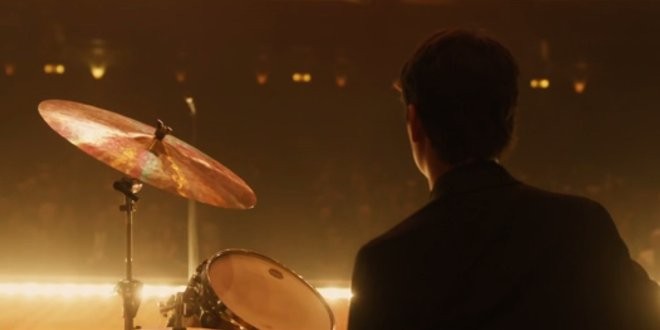 The screen is black.  There is the sound of a single wooden drumstick striking a snare.   Then again.  Then again, faster.  And faster.  A train is leaving the station …

“One night in 1937, a teenage musician called Charlie Parker joined a queue of players waiting to jam onstage at Kansas City’s Reno Club.  It was a special occasion.  A star guest in the rhythm section was Jo Jones, drummer for Count Basie’s Orchestra, one of the biggest swing bands in the US.  Charlie Parker thought his moment had come, 16 years old or not. He had been practising an improv method of his own, deploying keys rarely used in jazz tunes, and modulating between them to free up new ways of phrasing – and he’d bought a new Selmer saxophone.  When his turn came, he blew a chorus over the chords of I Got Rhythm that Jones, to judge by the warming of his wave-like cymbal sound, seemed to like.  Then Parker introduced a passing chord, improvised fluently in a new key, and sensed the audience’s and the band’s intrigued surprise.  But now he’d left the world he knew.  A college-trained musician could have called out the next chord to him in an instant, but Parker was a high school dropout making it up for himself.  While Jones’s pulse surged on behind him, the teenager lost the tune, and then the beat.  Jones stopped, and Parker froze, clutching his gleaming new saxophone.  Jones contemptuously threw a cymbal at his feet, and the reverberations were followed by the sound of laughter and catcalls. Ross Russell, Charlie Parker’s biographer, has the teenager leaving the club saying to himself, ‘I’ll be back’ …”

This legend is referenced on multiple occasions in writer/director Damien Chazelle’s Whiplash – that is, with one notable embellishment: the cymbal is not thrown at Parker’s feet, but at his head (“nearly decapitates him”).  But details are of minor importance when it comes to legends, and notwithstanding its Sundance-friendly indie-ish aesthetic, Chazelle’s own tale of an ambitious young jazz musician (Miles Teller’s Andrew) revels in its own mythical vibe.

In large part, Whiplash is an exercise in contrasts – most notably, between father figures.  In one corner is Andrew’s real father, Mr. Neyman (Paul Reiser), to whom we are introduced – rather self-referentially – in the opening montage.  Neyman is nurturing, supportive, and comforting; but their interactions and activities as father and son are distinctly passive.

And yet relative to his own family, Andrew feels like he lives on another planet.  On that world, the competition jazz band conductor, Mr. Fletcher (J.K. Simmons), is both God and Devil.

The simple attire is indicative of a no-nonsense approach – but notwithstanding the sincerity/insincerity of the good intentions that he wears on those short sleeves, there is plenty of nonsense to Fletcher.  For him, great collaborative art can only be born from manipulation – the tandem appeal to, and destruction of, the individual performer’s ego.  That said, Andrew becomes aware of Fletcher’s approach early in their relationship, and not only signs up for it, but embraces it – that is, until his own limitations get the better of him.  And when Andrew later chooses to follow the advice of his father to become the victim, he is sentenced to his own personal purgatory – a life of mediocrity.

Chazelle also draws a contrast between Andrew and Nicole (Melissa Benoist) – the object of his affection.  The 19 year-old Andrew saw the prestigious Shaffer Conservatory as first and only option in charting his future; Nicole thrust herself from Arizona into New York City’s Fordham U. for no real reason other than the latter is not the former.  Andrew aspires to be one of the greatest jazz drummers ever; Nicole has no major and no idea where she is going.  Andrew’s pursuits place him at least six decades behind his own time (in terms of both nature and degree); Nicole is the typified Millennial. 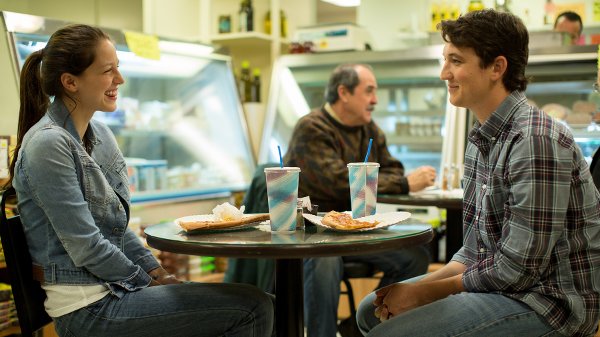 There is no denying a fundamental incongruence in the ethos of these two generations, as Chazelle tends to portray their moments of attraction in opposing profile shots.  That said, with a subtle sense of irony, Chazelle also questions our assumptions about such group identities.  For example, as Nicole drops a hint about the type of mother she had, Chazelle suggests that perhaps roles of nature and nurture may be too complex to take too seriously, and perhaps the one commonality they do share is a need to withdraw and distinguish themselves from their parents.

With all of the well-earned tension generated from the conflicting forces inside and outside of Andrew, the film’s finale is everything that it needs to be.  The setting is Carnegie Hall, but the emotional arc is all Rocky (1976).  To be sure, Chazelle never cheats us with the stakes of Andrew’s pursuit – e.g., no girlfriend appears at the last minute to support her man.  And although the duel of the father figures comes to a head in fight film fashion, neither side wins.  When Andrew takes a debilitating blow – naively betrayed by his own betrayal – he drifts off to the unconditional embrace of Neyman awaiting stage right.  But just before the count reaches ten, a wisdom that even the young possess takes over Andrew – the wisdom of the moment.  Like Rocky Balboa in that final round of his once-in-a-lifetime shot at the world champion, the battle for victory vis-a-vis Fletcher is ultimately subsumed by the struggle for dignity – the very core of identity, the baseline of artistic expression.  Andrew must pull himself back up the ropes and walk back to that kit.  When that happens, the band is his.  And not even Fletcher can stop that train.