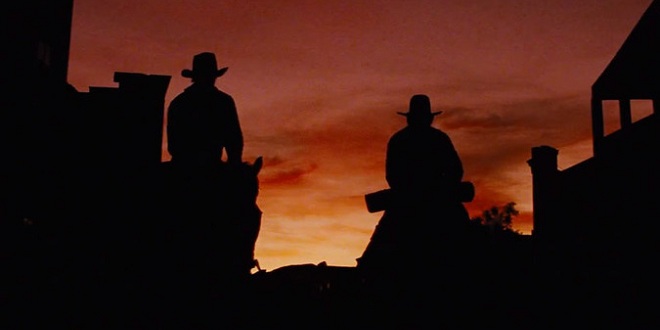 Based on the progression from Reservoir Dogs (1993) to Pulp Fiction (1994) to Jackie Brown (1997), some of us had hoped that the last decade would bring an evolution in the films of Quentin Tarantino.  But unfortunately, the downward spiral that began with the Kill Bill series (2003-2004) continues with Django Unchained.  The juicy fruit of bad guys seem to get lower and lower on the tree (here, it’s American “slavers” circa 1853).  The body counts get higher (here, I lost count about 20 minutes in).  The run times get longer (here, two hours and 46 minutes).  And as much as Tarantino loves to mash things up on the surface (here, it’s Blaxploitation plus Western), the ultimate genre is always the same – revenge fantasy.  In a terminal case of believing his own press, it appears that Tarantino has stopped worrying about making interesting movies and focused on simply creating enigmatic ones.

Django Unchained begins eight years before the Civil War with German dentist-turned-bounty-hunter, Dr. King Schultz (Christoph Waltz, Oscar-winner from Tarantino’s last film, Inglourious Basterds (2009)), tracking down and freeing a slave, Django (Jamie Foxx), who can identify three criminals that Schultz is hunting.  (In case you did not already know, the “D” is silent, and for some inexplicable reason, Django has to explain this to an ill-fated bad guy who would never have seen Django’s name written down.)  Of course, as Django is a perfect shot with a rifle and a pistol from the first moment he picks them up, the two eventually reach a deal to work together to build up bounties through the winter.  At the end of the winter (or “as the snow melts”), they will find and save Django’s wife, Broomhilda (Kerry Washington), with whom he was separated by their former slave-owner who “did not believe in marriage” (among other sins).  The team eventually do track Broomhilda down to the den of evil known as Candieland (wink, wink) – the planation of one Calvin Candie (Leonardo DiCaprio) – and hatch a head-scratching con to slip her away from Candie’s grasp.  (I say “head-scratching” because Tarantino telegraphs to every single soul in the theater exactly how this film is going to end, notwithstanding the last hour and twenty minutes of machinations they will have to endure to get there.)  And in the same way Tarantino rewrote the history of WWII for Inglourious Basterds, he takes similar liberties with a certain organized group of hooded white supremacist organizations that did not form until after the Civil War.  All of this is quite enigmatic, but not very interesting.

For the most part, the violence is as cartoonish (if not more so) than Tarantino’s last film, Inglourious Basterds.  Every other gunshot victim appears to have extremely high blood pressure, so you can rest assured that Schultz and Django are probably hastening the inevitable heart attack anyway.  And when a woman is shot from from on top of a stairwell at an 80-degree angle, you can practically see the cable pull her straight backward.  But Tarantino is an auteur acting with deliberate intent, so it’s all campy fun, right?  Well, not quite.  On top of an escaped slave being ripped apart by three dogs, there are at least three scenes showing Bloomhilda being whipped, branded, and pulled out of a “hot box” naked and writhing (all while screaming bloody murder) – none of which are presented for camp value.  The obvious message here (true to the film’s Blaxploitation homage) is:  violence against slaves was real serious business; but it’s just bloody good entertainment when Django and Shultz dispatch a white racist (forgive the redundancy in terms).  (Consider how Inglourious Basterds might have played peppered with two or three flashback scenes inside some gas chambers, and you get the idea.)   The only way that this distinction in tone can be justified is:  aside from the token characters that prove the rule (played by Waltz and Samuel L. Jackson), the white folks deserve it, but the black folks do not.  This is certainly very enigmatic in defining Django as a black superhero, but again, not very interesting.

And then there is the last bastion of Tarantino’s legitimacy – the one aspect of his films that even the early doubters could appreciate – the dialogue.  Yet despite all of the similarities to Inglourious Basterds, there is no equivalent to the farm-house scene in Django Unchained, much less a memorable line.  To put it rather inarticulately, Tarantino’s words are just not very cool any more.

So with all that said, what do we have left with Django Unchained?  Sheer fist-pumping entertainment in the form of the proverbial Big Dumb Movie (i.e., a film with a relatively large production/marketing budget that tends to deflect any intellectual critique by virtue of being “entertainment” and “not meant to taken seriously.”)   (Indeed, by the end of the film, Foxx looks strikingly similar to Will Smith in Wild, Wild West (1996).)  To be sure, other more “mainstream” directors of Big Dumb Movies (e.g., Michael Bay) would never wink and hat-tip so gratuitously at his film-literate audience (e.g., the quick zoom, the riffs on at least a half a dozen classic westerns, and the mix up of hip-hop with Ennio Morricone on the soundtrack).  And if all of these exercises in style are good enough to be entertaining (if not interesting), then by all means, Django Unchained is your film.  But for the rest of us, it’s just getting old and a little bit sad.

Expressing an appreciation (or lack thereof) for all sorts of films for over 25 years.
Previous: Killer Joe and All of the Places You May Not Want to Go
Next: My Favorite Film of 2012: Moonrise Kingdom