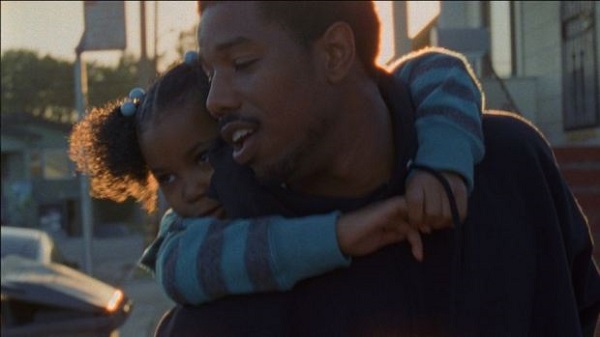 Posted by: Steven on July 29, 2013 in Movie Reviews Leave a comment

Considering that the original theatrical release date of the 2013 Sundance Film Festival hit Fruitvale (redubbed Fruitvale Station) was moved up three months, we need to talk about that case.  For what seemed like two solid weeks earlier this month, we in the U.S. were inundated by the media with details regarding the acquittal of George Zimmerman for the 2012 shooting and killing of an unarmed 17-year old African-American man named Trayvon Martin.  After all of that coverage, what do we know about Trayvon?  He was walking home from picking up Skittles and Arizona Tea at a convenience store when he was shot on that fateful evening in Florida.  He had a father, a mother, and a brother.  He was known to have some disciplinary issues in school.  He was known to chill with his friends and enjoy some weed from time to time.  He was known to boast about being a bad-ass.  Beyond that, we know very little.

And that brings us to writer/director Ryan Coogler’s feature film debut, Fruitvale (redubbed Fruitvale Station), the release date of which seems to have been moved up from Oscar season to coincide with the aftermath of the Zimmerman verdict.  Two hours into the new year in 2009, a 22 year-old African-American man named Oscar Grant III was shot in the back by a Bay Area Rapid Transit (BART) officer on a train platform.  Various videos of the incident were recorded by bystanders, and the BART employee Johannes Mehserle was convicted of involuntary manslaughter and received a 2-year sentence.  Fruitvale Station begins with one of those camera phone videos, as if Coogler wants to get the essential fact out of the way right off the bat.  Ironically enough, Coogler seems to care less about racial profiling and more about how the we in the U.S. deal with young black men who make mistakes – or more precisely, young black men who have less room to make mistakes than the rest of us.  Every once in a while, the press will dig up statistics – sometimes accurate and sometimes not – about the state of young black men in the U.S. (e.g., there are more black men who are incarcerated than enrolled in college).  Admirably enough, Coogler uses the tragedy of Oscar’s death as a platform to humanize that experience.

I do not envy filmmakers who take on this sort of material.  Given a seemingly large portion of the audience that does not appreciate the difference between a biopic and a documentary, those filmmakers face the initial problem of serving the “facts” versus expressing an emotional truth.  And biopics like Fruitvale Station, which are designed to raise awareness about a tragedy, must strike an additional balance – on the one hand, the filmmakers must humanize the main character to create a sense of authenticity and provide an emotional entry point for the viewer; on the other hand, they feel compelled to honor that life by delivering an impactful message about society as a whole.  Oversell the message and the movie will come across as preachy.  But portray a real human being, and the emotional impact will be lasting.

We learn very early in Fruitvale Station that Oscar (Michael B. Jordan) had served time in prison, was dealing marijuana, and had cheated on his girlfriend (Melonie Diaz), who is also the mother of his daughter (Ariana Neal).  We also learn very early in the film that he was compassionate and committed to family.  But notwithstanding the informal indie aesthetic, there is still a lingering sense of careful construction to this film.  One of the aspects that viewers may grapple with is the portrayal of the time Oscar spent alone on that fateful day.  That is, do Oscar’s actions – many of which seem inherently unverifiable – really ring true?  While there are no bad performances here, the script leans a tad bit too far toward the message side of the equation – i.e., portraying Oscar as symbol of young black men in America rather than Oscar as a human being.  That is, in depicting a day in the life (literally and proverbially), Fruitvale Station could have used more moments like Oscar trying to convince his daughter to brush her teeth and less dialogue professing to turn over a new leaf.  Regardless of what may or may not have actually occurred, do such overt statements of intent really make Oscar’s homicide more or less tragic or justifiable?  Does the audience deserve a little more credit in terms of ability to empathize?  Perhaps.  Perhaps not.

In any case, the net effect of Fruitvale Station is more vague sense of tragedy than punch in the gut.  And perhaps that is enough.

Expressing an appreciation (or lack thereof) for all sorts of films for over 25 years.
Previous: The Hunt (2013)
Next: Blackfish (2013) and How SeaWorld Doth Protest Too Much