Movie Reviews Review of Like Someone in Love (2013) | Aflixionado 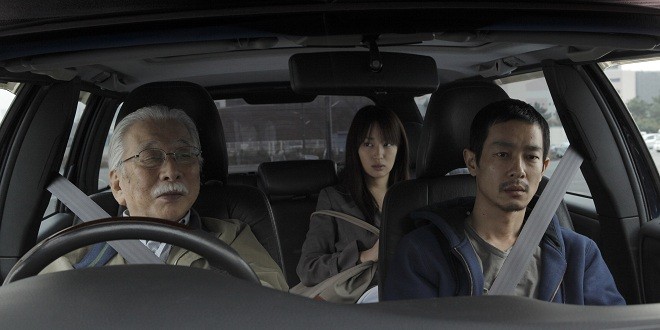 A call girl, her john, and her boyfriend get into a car … No, there’s no punchline.  Rather, this scenario happens to be one of the unlikely human intersections in Like Someone in Love – the most recent film by writer/director Abbas Kiarostami.  In only his second feature film set outside his native Iran, Kiarostami takes us on a ride through urban and suburban Tokyo, tracking a day in the life of a college student (Rin Takanashi), whose anonymity as the said call girl is eroding, and her unlikely client, an elderly semi-retired professor (Tadashi Okuno).

From the sleight of hand of the opening sequence through one of the most abrupt endings in the history of narrative film, Kiarostami’s uniquely compelling visuals are buttressed by strong performances.  And although there is certainly a measured pace, Like Someone in Love is a refreshingly straightforward affair from Kiarostami – one of the most enigmatic auteurs in international cinema.

On its surface, Like Someone in Love is a contemplation of how we make deep connections with others.  The shared experience of life lies in the immediate present (and not so much in our pasts), and the strangers with whom we share those moments can become our closest allies.  As we build our own identities – often rife with contradictions – our family, our lovers, and our friends can burden us with their expectations and judgments.

But then there is the provacatively jolting conclusion.  At one point in Stanley Kubrick’s Eyes Wide Shut (1999), a married doctor finds himself waiting with anticipation in a prostitute’s bedroom, and in our view of him lies a textbook entitled “Introducing Sociology.”  Kiarostami employs the same signposts here, and within this context, the meaning of the film’s ending may not be as elusive as some reviewers have suggested.  Whether it works or not is debatable, and that is the point.

For all of the strengths of Like Someone in Love, however, there is also a certain smugness.  Two overt references to Kiarostami’s previous film, Certified Copy (2011) (a gimmicky riff on Richard Linklater’s Before Sunrise (1995)), will likely generate lengthy pontifications among cine-bloggers about links, potential trilogies, etc., but for those of us not inclined to engage in the requisite mental gymnastics, only one really adds to this particular story or the characters involved.  And then there is title of the film – a reference to the swoony jazz standard which appears twice on the film’s soundtrack with timing suggestive of little more than irony for irony’s sake.

Tagged with: Abbas Kiarostami Like Someone in Love Rin Takanashi Tadashi Okuno

Expressing an appreciation (or lack thereof) for all sorts of films for over 25 years.
Previous: Lore (2013)
Next: Spring Breakers (2013)