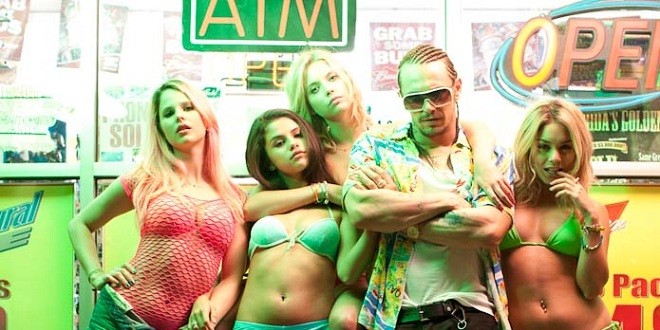 Spring Breakers, the most recent film by writer/director Harmony Korine, announces loud and proud that the 1990s are back.  The Decade of Irony happens to be my favorite in film, so you don’t have to sell me.  Irony can be useful and fun!  The problem with Spring Breakers is an utter and complete lack of subtlety.  And I am not talking about a good lack of subtlety – like “Stuck in the Middle with You” playing over the soundtrack while a mobster tortures a cop in a deserted warehouse.  No, I’m talking about the lack of subtlety one would expect from a first screenplay by a 17 year-old male who just finished a community college course in Introduction to Postmodern Cinema.  Korine is certainly not 17 years old, but he is no stranger to the indie film revolution of the 1990s.  True to that movement, at a wee 21 years-old, Korine penned the screenplay to one of the most nihilistic movies of the decade – Kids (1995).  Indeed, Korine’s debut feature film as director, Gummo (1997), was also his last feature to get any sort of wide theatrical distribution.

In Spring Breakers, the camera stumbles upon four living breathing clichés – the God Girl (Selena Gomez), the Stoner Girl (Rachel Korine), and the Bi-Sorority Chicks (the indistinguishable Vanessa Hudgens and Ashley Benson) – who are desperately in need of a change of scenery.  They venture down to Florida for said Spring Break, financed by the robbery of a chicken shack by the blondes (sans the God Girl) in what is the one unique and interesting shot in the whole movie.  Partying ensues.  Lots of partying.  Naked (or in the case of A-listers, Gomez and Hudgens, semi-naked) boobies and butts bounce on the beach to the beats of the club music soundtrack – all the while interspersed by ironic voicemail messages to mothers and grandmothers and ironic images of vomit-covered toilets.  One particular drug-fueled party gets out of hand, and the girls land in jail.  Enter the white gangsta/drug-dealer/rapper (the distinctly un-threatening James Franco), who bails them out without knowing any of them, and true to the ultimate male fantasy, take in the girls as his own personal henchwomen in crime.

Even beyond the use of names like Faith, Candy, and Alien, the characterizations are so vapid that we cannot possibly be expected to care about them or anything they feel or do.  Of course, that is not the point.  Rather, the art film dressings signal another agenda (social commentary) with all of the subtlety of fellatio performed on the barrel of a gun.  (Yep, that actually happens.)  Certain equally unsubtle shots (said bouncing boobies and butts on the beach) and lines (“pretend it’s a video game,” “spring break forever, bitches,” etc.) are repeated so many times that the relatively modest 94 minutes of Spring Breakers grows from tedious to torturous.  Eventually, the whole affair almost becomes humorous.  Almost.

Expressing an appreciation (or lack thereof) for all sorts of films for over 25 years.
Previous: Like Someone In Love (2013)
Next: Stoker (2013)