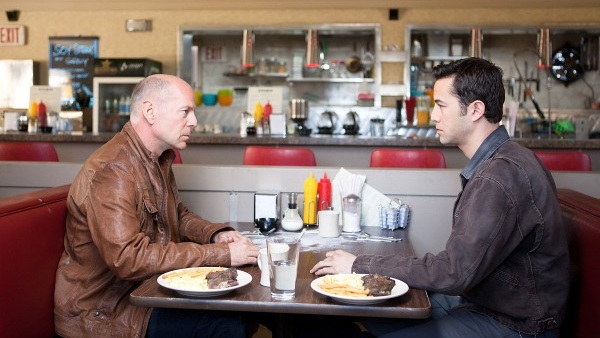 Posted by: Steven on September 29, 2012 in Movie Reviews 2 Comments

More than any other genre, sci-fi asks its viewers to leap particularly far to suspend disbelief.  The worst of these movies trade in lowered expectations simply to create spectacle (e.g., that can defy the laws of physics).  But the best writers and directors of the genre take this unique opportunity to delve into our humanity in ways that the more traditional narrative cannot.

Countless classical and modern dramas have touched on themes of regret and the intense human desire to change the past.  Man/woman does something bad, and years later, man/woman broods and suffers.  (See, e.g., Atonement (2007).)  But in a sci-fi film, the writer and director can allow you to explore what would happen if you could actually sit down with your younger self and have a conversation.  What if we could go back and fix things?  Would indulging that fantasy extinguish those regrets, along with all the other evils in the world, or would we inevitably generate new reasons to resent ourselves and others?

Such questions permeate writer/director Rian Johnson’s Looper (2012).  The “present” is the year 2044 and a vaguely more dystopian society than our own.  A small percentage of the population (“TKs”) have begun to evolve telekinetic powers, although the scope of these powers is limited to little more than parlor trickery.  Early on in the film, we are told that two technologies emerge within the next 30 years into the “future” – time travel, which immediately becomes an outlawed technology relegated to the underground; and “tagging,” which renders it difficult and inadvisable to kill a person and try to dispose of the body.  As a result, organized criminals of the future have developed a system where they send their enemies and other loose ends (along with bars of silver strapped to their bodies as payment) back in time to the “loopers” to be assassinated and discarded.  Of course, the name of these executioners for hire reveals the one downside in their contracts with the mob – the loopers themselves run the risk of becoming loose ends in the future, and as a result, they may eventually be sent back to meet their fate and “close the loop.”

Joe (Joseph Gordon-Levitt) is such a looper.   Abe (Jeff Daniels), a mobster sent from the future to run the looper program, took Joe in after being abandoned by his mother and put the first gun in his hand – giving him the opportunity to live a relatively good life and the hope of an early retirement to France.  (Or at least that’s the cover story.)  One day, Joe is dutifully awaiting in a remote field for his next appointed victim who is running uncharacteristically late.  When his designee finally does appear, he is not tied up and hooded (as is the modus operandi), and he looks strikingly familiar.  Old Joe (Bruce Willis) is able to take advantage of young Joe’s surprise and escapes to pursue his own agenda in the 2044 timeline.  And since young Joe was unable to close his own loop, Abe devotes his entire staff to tracking down and exterminating both Joes.

In the ensuing chase, the characters not only wrestle with the slippery realities of regret, redemption, and self-determination, but whether any means justifies a righteous end.  By the time we reach the endgame of this moral morass, the protagonists and the antagonists are not easy to distinguish.

Although Looper is gracing the metroplexes, Johnson’s third feature often feels more like an art film than a mainstream sci-fi pic.  With his feature debut Brick (2005), Johnson pushed a genre (film noir) into an unlikely setting (high school); and about half way through Looper, the action comes to an abrupt stop as Joe’s narrative moves to the relative quiet of a family farm occupied by two new characters – Sara (Emily Blunt) and her young son Cid (Pierce Gagnon).  With the most effective scenes confined to simple interiors, Johnson relies mostly on the low-tech.  Although the special effects are convincing when they need to be, the scenes of dialogue – not the action set pieces – fuel the dramatic engine.  (The first scene between Abe and young Joe – ostensibly an interrogation – not only demonstrates the caliber of the performances, but the confidence of Johnson as a writer willing to engage the viewer without the all-to-familar level of histrionics.)

To be sure, some of the exposition could be alternatively viewed as efficient or lazy.  As with any sci-fi film, you could burden yourself with questions about the countless details.  (e.g., Why does the mob send old loopers back to be killed by their younger selves as opposed to other loopers?)  But the very concept of time travel necessarily creates a paradox.  So if you are willing to get on that train, you might as well stay for the ride.  And what a ride it is.

Expressing an appreciation (or lack thereof) for all sorts of films for over 25 years.
Previous: Revisiting David Fincher’s The Game (1997)
Next: We’ll Always Have Paris … Texas