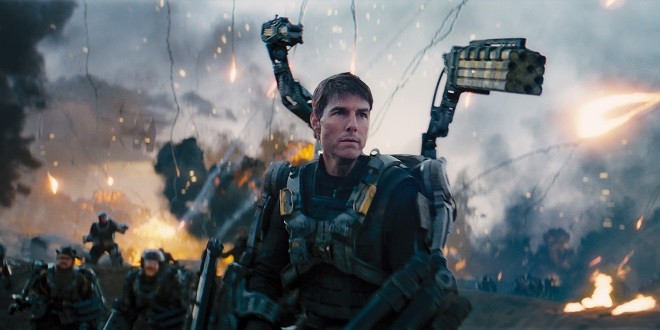 Posted by: Steven on June 14, 2014 in Movie Reviews Leave a comment

Let’s talk about Bad Movie Endings (BMEs).  BMEs are as old as popular film itself.  Although I am a curmudgeon when it comes to BMEs, I must admit that one of my favorite films, Psycho (1960), suffers from what has come to be known as one of the most notorious BMEs.  What may have helped shocked viewers swallow the very first slasher film comes across like insultingly didactic exposition six decades later.  That said, I simply cannot forgive a contemporary filmmaker’s use of the very same device to commit murder-by-epilogue upon an otherwise exemplary film (Take Shelter (2011)).

As big summer blockbusters go, Edge of Tomorrow starts off promisingly enough.  Set in the proverbial not-too-distant future, a meteor carrying a hive of aliens lands in Germany.  Faux news reports inform us that these nasties (with design and kinetics borrowed heavily from the Matrix trilogy) have been dubbed “Mimics” due their uncanny ability to anticipate our every militaristic move – at least up until recently.   PR guru and media whore Major Cage (Tom Cruise) dutifully drums up support for an unprecedented assault, only to find himself demoted at the last minute to join a doomed invasion of Normandy.  (Yep, that’s D-day Normandy.)  When Cage is killed, taking a unique Mimic along with him, he wakes up back on the military installation a day earlier with all of his memories in tact.  And this cycle (live-die-repeat) continues while the rest of the world obliviously follows along.  Eventually, Cage teams up with the war’s only hero, Rita (Emily Blunt), who (not coincidentally) had been caught up in the same wheel.

To any cineaste who has seen the trailer, Edge of Tomorrow may seem like nothing more than a genre-crossing remake of Groundhog Day (1993), and director Doug Liman certainly plays with that connection.  (Besides Rita being the name of the leads in both films, at one point, Cage and Rita engage in a rather clever twist on a romantic how-do-you-know-so-much-about-me exchange in Groundhog Day.)  But the more direct touchstone for Edge of Tomorrow is the first-person-shooter videogame (e.g., Halo) – not just in the obvious plot device of replaying over and over until the amateur hero earns a confrontation with the big boss, but in the entire aesthetic.  With a simultaneously playful/violent vibe, Edge of Tomorrow has garnered a number of positive reviews, which appear to be fueled not so much by its blunt commentary on the futility/inevitability of war, but as a fertile ground for metaphors – the spiritual travel of Taoism, the endless tedium of marriage, and by far the most popular, Cruise’s own indestructible career.

But even the more favorable reviews consistently acknowledge Edge of Tomorrow’s BME – an inexplicable cheat even within the paradoxical logic of time travel sci-fi.  (Think Superman (1978).)  However, the bigger problem is the entire last third of the film.  Having used the replay gimmick to challenge the dubious assumptions of modern action film reality (e.g., being slammed against a cement wall will actually break your back, trying to roll under a moving vehicle will usually kill you), Liman and company then proceed to blatantly and repeatedly draw from that poison well for the film’s final set pieces.  I like irony as much as the next guy, but here, it’s just the byproduct of lazy storytelling.  As with the Marvel superhero franchise, there seems to be this cynical notion among producers of this sort of fare that all the endgame needs is a lot of hyper-active, physics-defying, explody stuff.

I have previously referred to this epidemic within recent Hollywood genre films as Third Act Disease (TAD).  I suppose that the prevalence of TAD is not surprising in an era when screenplays are often the product of three or more cooks in the kitchen or incomplete at the time production begins (both of which were true in the case of Edge of Tomorrow).  I also suspect that the suits will continue to allow TAD to proliferate as long as we are willing to give positive reviews for the first two-thirds of a movie.

Expressing an appreciation (or lack thereof) for all sorts of films for over 25 years.
Previous: Is the World Too Big for Godzilla?
Next: The Rover (2014)