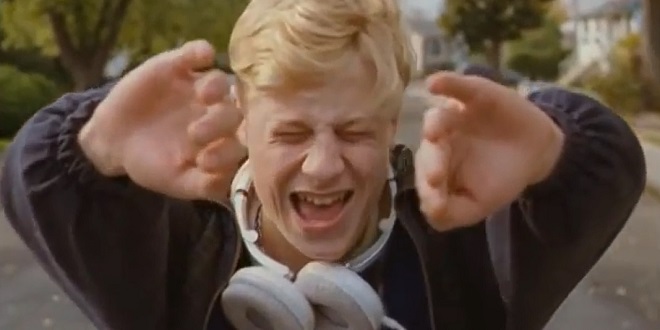 Posted by: Steven on November 23, 2015 in Film Essays Leave a comment

In Mommy, a widow named “Die” (Anne Dorval) retrieves her 16 year-old son, Steve (Anton-Olivier Pilon), who has just been ejected from a juvenile center, and informally enlists the help of her neighbor, Kyla (Suzanne Clement), to cope with his volatile behavior.  As the end credits rolled, I initially thought that this latest feature by the French-Canadian indie wunderkind, Xavier Dolan, would certainly be my own personal entry for the most insufferable film of 2015 (the 2014 winner being The Great Beauty).  Nonetheless, so many have heaped the hyperbolic praise upon Mommy (of which I would only agree with the strength of Clement’s performance), and so many of the unimpressed seem too exhausted by the entire proceeding to articulate why, that I feel compelled to offer the following observational counterpoints:

#1. Steve-O.  To my sensibilities, Dolan’s plotting and characterizations are inexplicable – on the one hand, attempting to evoke so much sympathy for Steve; on the other hand, portraying him as one of the most emotionally manipulative on-screen personalities in recent history.  The net result is that certain moments toward the end of the film just do not pay off as [the big score clearly indicates was] intended.  On top of that, I am almost dumbstruck by the accolades for Pilon’s performance, which often feels less like a troubled teen and more like a second-year theatre student’s take on a troubled teen (read: overbaked).  Specifically, I didn’t register any of that “charisma” referred to by the women in the film, which is supposedly counterbalancing all of that teen angst and Oedipal teasing – all of Pilon’s attempts at humor and good spirits simply come across as awkward and creepy.  Suffice to say, Pilon is no James Dean, and Mommy is no Rebel Without a Cause (1955).

#2. The Music.  As Scott Tobias put it, Dolan relies way too much upon the soundtrack to do the heavy lifting, particularly the eye-rollingly non-ironic use of pop songs.  The movie starts with Sarah McLachlan’s “Building a Mystery” (get it?), which is followed within minutes with Dido’s “White Flag,” with Dolan making sure that the line “I will go down with the ship” is brought up in the mix at just the right moment in a break in the dialogue. But the most face palm-inducing, YouTube spoofable moment in Mommy is a montage to Oasis’ “Wonderwall” – the whole song – which includes a skateboarding-in-the-middle-of-the-road sequence complete with lyric-appropriate hand gestures by Pilon (I’m prying open that wonderwall now!).  Suffice to say, Dolan is no Cameron Crowe, and Mommy is no Say Anything (1989).

#3. The Gimmick.   From the moment the opening frame appears in the form of a square, one might immediately suspect that the director has chosen this distractingly unconventional aspect ratio for the purpose of later changing it to emphasize an obvious shift of perspective.  [SPOILER ALERT: And one would be correct!]  Suffice to say, Dolan is no Wes Anderson, and Mommy is no The Grand Budapest Hotel (2014).

#4. The Pacing.  For a film consisting mostly of histrionic-fueled iterations of mommy and son taking 1 step forward and 2 steps back, there is nothing in this 139-minute opus that could not have been accomplished in 90 minutes, which (along with #2 and #3) only adds to a naive sense of self-importance that infects the entire proceeding.

A lot of reviewers have expressed disbelief that Dolan wrote and directed this film at the wee age of 25.  I, for one, am not a bit surprised.

Expressing an appreciation (or lack thereof) for all sorts of films for over 25 years.
Previous: The Lonely Hearts Killers
Next: Spotlight (2015)