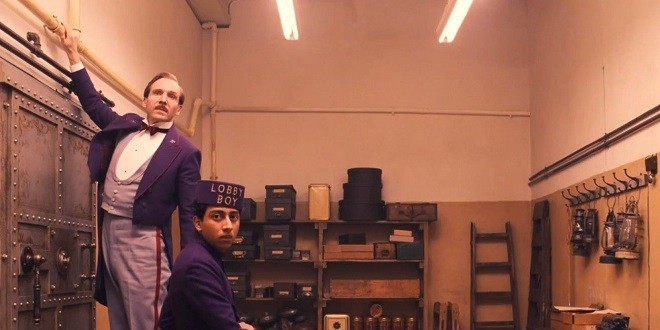 Posted by: Steven on March 15, 2014 in Movie Reviews Leave a comment

As an unabashed lover of Moonrise Kingdom (2012), I had some trepidation upon first viewing the trailer for The Grand Budapest Hotel, which was literally punctuated by a litany of A-list actors – many familiar to this particular stage (Edward Norton, Tilda Swinton, Jason Swartzman, Willem Dafoe, Jeff Goldblum, Harvey Keitel, Bill Murray, Owen Wilson, Adrien Brody’s hair) and many not (Ralph Fiennes, Saoirse Ronan, Jude Law, F. Murray Abraham, Tom Wilkinson).  At this point, I could picture half of Hollywood in the queue to make an appearance on those dollhouse sets, with arrow-straight line readings ready to go, as if about to be painted en masse by Picasso.  In any case, the palette seemed strikingly familiar.  Even I wondered if there might be such a thing as too much of The Wes Anderson Style.™

Although a good bit darker and not quite as thematically resonant as its predecessor, The Grand Budapest Hotel works quite well as a straight-up murder mystery (“straight-up” being a relative term).  Truth be told, there’s not much of a mystery, but that’s the irony of Anderson’s approach to every proceeding.  We’ve all seen and heard all of this before (visually and textually), and yet, there is something irresistibly enchanting about a filmmaker whose craft lies, first and foremost, in not taking the simplest elements of the storytelling for granted.  Specifically, there is a certain literary quality – particularly in the abbreviated richness of his character introductions – to the extent that at times, it feels more like we are reading a short story than watching a film.

At other times, the presentation almost overwhelms.  From the silhouette of a midnight lover slinking away on the rooftops to an accelerated ski chase, so much of the imagery and kinetics are rooted in the era of silent films; and yet, the colors and sounds are too carefully chosen to simply chalk it all up to imitation/homage.  (The Alamo Drafthouse programmers took it upon themselves to familiarize everybody with trailers and scenes from the films of Ernst Lubitsch in the 30 minutes preceding screening, which seemed like a rather reductive exercise.)  However the influences tally up on the film geek scorecards, it all translates to one inarguable conclusion: with each successive story, Anderson treats cinema as if it were still a new medium.  And as such, the bittersweet exuberance he imbues in each of his works is difficult to dismiss – even by the most cynical of cinephiles.

Expressing an appreciation (or lack thereof) for all sorts of films for over 25 years.
Previous: Pride in the Name of Love: Like Father, Like Son (2014)
Next: Tim’s Vermeer (2014)