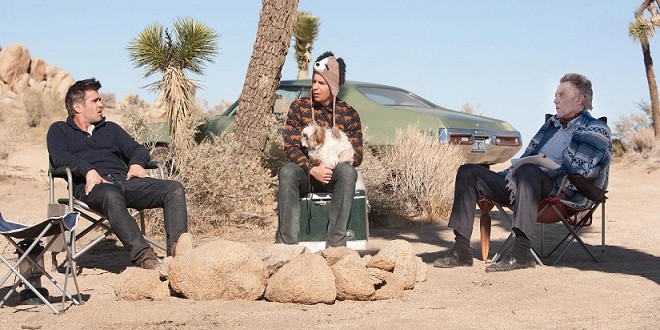 Posted by: Steven on October 14, 2012 in Movie Reviews Leave a comment

Quentin Tarantino and Charlie Kaufman agree to write and direct a film together, but after a prolonged production, Tarantino manages to get final cut … with a bullet to Kaufman’s head.  That would be my pitch for writer/director Martin McDonagh’s latest film, Seven Psychopaths.  You say you don’t like film snobs who use film references like their own ninth part of speech?  You say you don’t like your comedy peppered with gratuitous violence?  You say you could care less why the Zodiac killer’s home might be overrun with white rabbits?  Well, then Seven Psychopaths is probably not the film for you.

Of course, a movie about writing a movie that also knows it’s a movie would inevitably be set in Los Angeles.  The story revolves around Irish screenwriter Marty Faranan (Colin Farrell), his best friend, Billy Bickle (Sam Rockwell), and Hans (Christopher Walken), with whom Billy runs a dognapping racket.  (Billy tends to talk to himself in the mirror, if the name didn’t already clue you in.)  Billy steals a shihtzu from the wrong mobster, Charlie Costello (Woody Harrelson).  In the meantime, Marty is trying to pen a new screenplay for which he only has a title (“Seven Psychopaths”).  Suffice to say, all hell breaks loose.

McDonagh is openly attempting to come to terms with the often inexplicable conventions of the men-with-guns genres within the film itself (right down to the recent trend of burying epilogues in the closing credits), even if there is nothing particularly revelatory about McDonagh’s criticisms of these genres (e.g., the way female characters are written).  In lesser hands, I suppose that Seven Psychopaths would end up being pretentious tripe.  But well-written and well-executed dialogue can elevate any material.

And that brings me to the best part of the film – a cast of actors that really seem to enjoy what they are doing.  Farrell, Rockwell, Walken, and Harrelson all get moments that range from screwball comedy to downright affecting.  Linda Bright Clay (as Hans’ wife) and Tom Waits (as a bunny-carrying storyteller) also provide some wonderful color to the proceedings.

All that said, on one viewing, I am left with the feeling that the whole is lesser than the sum of the parts – the same somewhat inarticulate criticism I also had for The Master (2012).  Although McDonagh has avoided the sophomore slump (a la Richard Kelly), Seven Psychopaths ultimately suffers from a lack of narrative focus that was so evident in his debut, In Bruges (2008).  But if you’re in solely for the journey and not the destination, then Seven Psychopaths might just be one of the best films of the year.

Expressing an appreciation (or lack thereof) for all sorts of films for over 25 years.
Previous: Argo (2012)
Next: My Five Favorite Film Adapations by the Master of Horror: Stephen King