Posted by: Stacey on January 7, 2019 in Other Stuff Leave a comment

10. A Fantastic Woman. This fantastic film about a transgender woman navigating the aftermath of her boyfriend’s death impressed me by resisting melodrama and club-you-over-the-head agenda messaging, instead trusting the power of its story. Transgender actress, Daniela Vega, delivers an understated but powerful lead performance.

9. Thoroughbreds. Evil plans are put in motion when an unlikely friendship, between a psychopath and a prep, forms in wealthy suburban Connecticut and a marvelous dark comedy unfolds.

8. Game Night. My nominees for most fun movie of the year (in no particular order) are Ralph Breaks the Internet, I Feel Pretty, and Game Night. Don’t miss any of these if you need a feel-good laugh session. But the needy skepticism of Jesse Plemmons’ “Gary” puts Game Night in the lead.

7. The House that Jack Built. Matt Dillon (from that 1990s movie Singles, for example) worked with Lars Von Trier (from that movie Antichrist, for example) on this longitudinal study of a serial killer. And it worked. Mind blown.

6. Can You Ever Forgive Me? Everyone says this is Melissa McCarthy’s best role to date, and it is! It’s wonderful to see her flex her deeper acting muscles in this biopic about writer Lee Israel, who forged letters from famous historical writers when her own career stalled. And Richard E. Grant as Jack Hock brings a perfect off-balance lightness to offset her misanthropy.

5. The Old Man and the Gun. My mom had a crush on Robert Redford in the 1980s, and forty years later I can still see why. He’s positively swashbuckling in this story about a career robber. Forrest Tucker (Redford) is charming, polite, and truly passionate about his “job”. I don’t know who else could have pulled this off (George Clooney?). 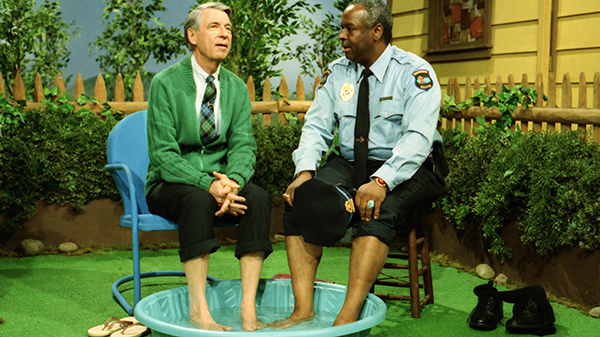 4. Won’t You be my Neighbor? Documentaries don’t usually make me cry. But Mister Rogers did.

3. Sorry to Bother You. I’m still unpacking this unpredictable parable of wealth, work, and class complete with evolving photographs, terrible rapping, and mutant horse people. This film will entertain you and make you think.

2. Revenge. It’s hard to put into words what I love about this movie, but I think it’s down to this: I love that it’s both over-the-top indulgent pulp and piercingly well observed and executed. As symbolized by the iconic image of the fully arced phoenix still wearing a ridiculous pink earring in her one remaining ear.

1. The Favourite. The only film I saw twice in the theater. By the director of The Lobster, one of my most beloved recent films. Starring my ‘favourite’ actress. This film confirms what I’ve always suspected to be the case: once Rachel Weisz leaves, everyone is miserable.

Tagged with: 2018 best films a fantastic woman can you ever forgive me game night movie Revenge movie sorry to bother you the favourite movie the house that jack built the old man and the gun thoroughbreds movie won't you be my neighbor

I'm no film buff like Steven. My favorite movies before meeting Steven (which would reflect my taste independent of his influence) were Memento, The Game, Young Frankenstein, and the Princess Bride. The best movies I've discovered since meeting him include Mulholland Drive, Eternal Sunshine of the Spotless Mind, Synecdoche NY, A Serious Man, Inception, Black Swan, Melancholia, and many more that I'm not thinking of right now...
Previous: He Said: Top 10 Films of 2018
Next: He Said: Top 10 Films of 2019