Movie Reviews The Innocence of Muslims: The Trailer That Changed the World? | Aflixionado 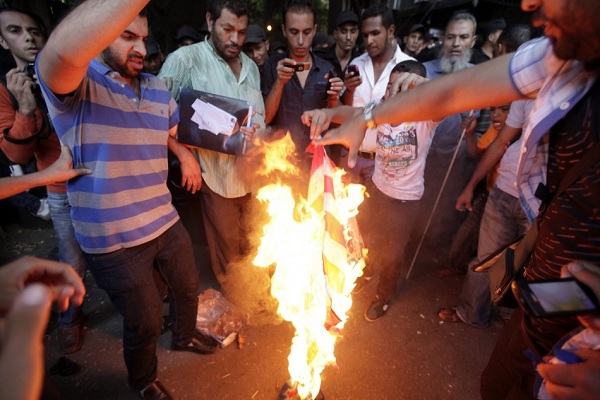 The Innocence of Muslims: The Trailer That Changed The World?

Posted by: Steven on September 14, 2012 in Other Stuff Leave a comment

Unless you have been living under a rock the last week and immune to the ever-escalating media coverage, the YouTube clips purporting to be a trailer for a movie entitled “The Innocence of Muslims” (in short form and long form) – portraying Mohammad in less than flattering terms – was recently translated into Arabic and sparked a series of violent protests in half a dozen nations in the Middle East (none of which are particularly fond of Americans in the first place). According to the most recent media reports, the film was purportedly shot by Nakoula Basseley Nakoula (a/k/a “Sam Bacile”), a Coptic Christian in California, with the film permit acquired by a Christian nonprofit group.  That said, there is little evidence (as is evident from the production value) that Mr. Bacile is a professional filmmaker.  (See “The Innocence of Muslims Shot on Hollywood Set, Film Permit Connected to Christian Charity,”Huffington Post, 9/14/2012.)

Here in the United States, the First Amendment of the Constitution gives (or strives to give) everybody a place in the marketplace of ideas. Muslims can talk about their religion. Members of other religions – or of no religion – can mock them. They can yell and scream at each other. And we have the freedom to believe whatever we want. It’s the American Way. As the saying goes, “I may not agree with what you say, but I will die for your right to say it.”

That said, it is apparent that the “trailer” to this “movie” was made to provoke Muslims in the Middle East to take to the streets in acts of violence. The goal was not to preach to the converted (whatever particular fringe ideology was involved). Rather, it would seem that the intent was to further alienate mainstream America – who generally value the idea of an unconditional freedom of expression – from the Muslim world by showing the former the latter’s “true colors” (i.e., Islam is an inherently violent intolerant religion).  (Personally, I don’t believe the reaction should be too surprising once you accept the notion that an idea – that is, any idea – should have more value than human life.)

Has this mission of the video been accomplished?

I have a hard time coming to that conclusion. I believe the level of media coverage distorts the scope of the problem (which in turn feeds into the purpose of the video).  Without intending to minimize the suffering of those who are victims of the violence, I have to ask how many people are in these “mobs” rioting in the Middle East? As broad an information source as Google is, I cannot seem to find any cumulative number among the media reports. However, Wikipedia tells me that as of 2009, there were 1.6 billion Muslims in the world, representing 23 percent of the population. Perhaps, we really need to get some perspective here. Would the violence escalate as fast if the media gave sometime to those Muslims who refuse to buy into this dynamic?

Citing situations such as this, many of my fellow atheists are prone to assert that the world would be a “better” place without religion because of all of the violence it precipitates. I am as skeptical of that conclusion as I am of the notion that the violent protests are entirely about a YouTube attack on their religion. As a person close to me (who shall remain anonymous) once observed, “There really is no reason to be racist or sexist – just get to know each and every person and you can find a perfectly good reason to hate them.”

Tagged with: The Innocence of Muslims Video

Expressing an appreciation (or lack thereof) for all sorts of films for over 25 years.
Previous: The Anti-Bildungsroman: An Appreciation of Kenneth Lonergan’s Margaret
Next: The Master (2012)