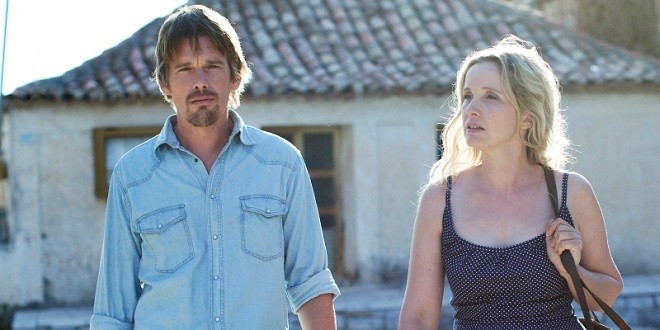 (NOTE:  This review does contain spoilers of the two previous films, Before Sunrise (1995) and Before Sunset (2004).)

In the interests of full disclosure, I must confess to a certain unavoidable degree of subjectivity in assessing what has become writer/director Richard Linklater’s fictional riff on the Seven Up! documentaries (1964-).  I was a 24 year-old when the post-graduate wanderer, Jesse (Ethan Hawke), decided to strike up a conversation with the radiant French pixie, Celine (Julie Delpy), on a train bound for Vienna the night before his return home to the States (Before Sunrise (1995)).  At the time, this night-long conversation of a film seemed both romantic and real.

Nine years later, I had earned enough regret in my life to have lost a number of delusions I had about romantic love at age 24.  And in Before Sunset (2004), we found out that Jesse and Celine never met at the train station six months after their fateful encounter, as they had originally promised in true Hollywood fashion.  Instead, Jesse, a semi-successful writer riddled with a vague feeling of discontent, runs into Celine while on the Paris stop of a book tour.  From their day-long conversation, there is little doubt that, despite the passage of time, Jesse and Celine were as meant for each other as is possible.  But at this stage in the game of life, there would be collateral damage if Jesse chose to miss his flight back home this time.  Like the first film, we were left wondering.  And with both films, Linklater, co-writer Kim Krizan, and their two co-stars (who earned Oscar nominations as co-writers) tapped directly into my time and place to pose the question:  What is the truth of romance?

Nine years later, as the trailer to Before Midnight reveals, we find Jesse and Celine together on an extended vacation in Greece with their two twin daughters.  Their age is really starting to show.  Removed from the vacuum of the streets of Vienna and Paris, the decisions made after the last film have affected others – haunting their relationship and leaving them at yet another crossroads.  So quite appropriately, Linklater and company have chosen to expand the narrative scope.  The first half of the film introduces Jesse’s son and a cast of friends who play like ghosts of lovers past, present, and future, while the second half brings us the inevitable conversation between Jesse and Celine as they make their way through one last romantic night before returning home.  Even if the seams between script and improvisation do show from time to time, the conversations are just as honest and convincing as they were in the first two films.  In negotiation mode, Jesse and Celine are just as rough around the edges as we remember them, albeit carrying a bit more baggage.  The net effect is verisimilitude – uncomfortable at times, but never straying into the realm of the cynical.  And although we are not left with the same plot cliffhangers as in the previous two installments, we are left with the same fundamental question:  Will Jesse and Celine be together?  And like real love, we can never take the answer to that question for granted.

Expressing an appreciation (or lack thereof) for all sorts of films for over 25 years.
Previous: Star Trek Into Darkness (2013)
Next: Stories We Tell (2013)