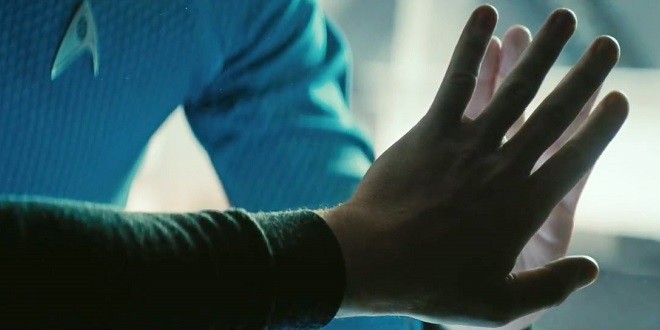 The very title of director J.J. Abrams’ sequel to the reboot, Star Trek (2009), begs comparison with The Dark Knight (2008), another sequel which was widely considered an even stronger film than its origin story.  The comparison is even more apt considering the oft-stated critical rule of the Star Trek franchises – the even-numbered entries are always the better than the odd (e.g., Star Trek II: The Wrath of Khan (1982), Star Trek: First Contact (1996)).  So how does Star Trek Into Darkness stack up to the scorecard of these great sequels?

Great Sequel Element #1 – The Ultimate Villain?  Check.  The casting of Benedict Cumberbatch was a shrewd move, as was allowing his character to don long coats like a certain 19th Century fictional detective.  One cannot discuss too many details about the identity of this space terrorist without getting too spoilery.  Yet that very warning should intimate that Abrams and company have opted not to stray too much from the Star Trek mythology.  The good news is that Star Trek Into Darkness offers even more delicious rewards for fans of the franchise than the 2009 reboot.   The bad news is that most of the clever turns will be lost on the uninitiated.  (Consider this a litmus test:  Do you have to google the word “tribble”?)  One could make the argument that the alternate timeline of the new franchise is, in and of itself, a contemplation on the nature of fate and self-determination.  But even so, it would seem that creative opportunities are lost by tying this new film so tightly to the narratives of the original film franchise.

Great Sequel Element #2 – The Big Ideas?  Check.  Admirably, both The Dark Knight and Stark Trek Into Darkness pose the same thematic question – namely, whether we as a society should become a monster to stop a monster (i.e., terrorism).  Perhaps these questions bear repeating in the post-9/11 world.  A society that compromises the very values that makes it great in order to win its battles (e.g., by locking suspected terrorists away indefinitely with no right to a trial) ultimately loses the war.

Great Sequel Element #3 – The Freight Train Plot?  Check.  Like all of the aforementioned sequels, Star Trek Into Darkness never lets the audience stop to think too much about how those big ideas are being handled.  For better or for worse, the action is dialed up to level 10.   Although one would expect Captain Kirk (Christopher Pine) to be the kinetic centerpiece, surprisingly enough, it may be Zachary Quinto’s Spock who provides the standout supporting performance.

Great Sequel Element #4 – The Big Stakes?  Well, not so much.  In Star Trek: First Contact, the fate of the Federation – and even humanity – was in the balance.  The filmmakers of The Dark Knight and The Wrath of Kahn were even willing to kill off a major character.  In contrast, thanks in part to plot turns telegraphed from a light year away, Star Trek Into Darkness may leave viewers feeling throughout that Kirk and the Enterprise crew are never really in danger.

In the final tally, Star Trek Into Darkness is bound to be great fun for even the casual Star Trek fans.  But that fun may also be tempered by a certain sense of disappointment in those who hoped that Abrams and company would boldly go where the franchise has never gone before.