Movie Reviews Review of Blue Is the Warmest Color (2013) | Aflixionado 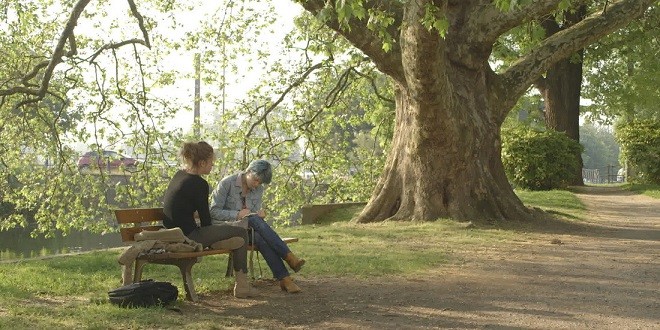 Posted by: Steven on November 3, 2013 in Movie Reviews 2 Comments

The buzz on Blue Is the Warmest Color (2013) – the most recent Palm d’Or winner by French director Abdellatif Kechiche – characterizes the film as a close-up-heavy, graphic examination of the life cycle of a lesbian relationship from point A to Z.  As it turns out, the film is actually the coming-of-age story of a young woman, Adèle (Adèle Exarchopoulos), that more generally portrayed in a very indie-intimate, semi-vérìté style.  Based on a graphic novel Blue Angel by Julie Maroh and set over the course of four years, the first-love story is but the centerpiece of a film without a traditional beginning or end.

As such, the undeniable strength of Blue Is the Warmest Colour lies in its first hour, as Adèle navigates the difficult terrain of a 17-year-old high school strudent who does not quite have a grip on her own sexuality.  The resulting series of episodes, free from the standard narrative conventions of a feature film, flow quite organically.  Exarchopoulos is simply sublime – her verbal and nonverbal performance, as well as her physicality, perfectly encapsulate a character teetering on the elusive line between girl and woman.  And yet life becomes even more difficult when she finally does connect with the first true object of her desire, the blue-haired college senior Emma (Léa Seydoux).

Now let’s talk about sex.  (I’m sorry, was that abrupt?)  As the flirtations between Adèle and Emma reach a crescendo, they finally consummate their attraction in a scene that plays a good 10 minutes and earned the film a NC-17 rating in the U.S.  Suffice to say, about four or five minutes probably would have been just effective, although one could say the same thing about several other sequences in the film.  But even for those of us who are not particularly prudish, the issue is not the length or the graphic content; rather, the problem is how fake it all feels and how it pulls the viewer out of an otherwise unflinchingly honest and realistic film.  The setting for the now infamous scene is uncharacteristically indeterminate (a generic bed with blue sheets, lit generously with candles), and Kechiche has the actresses take use through what must be the first eight positions of the The Joy of Sex for Lesbians – an utterly remarkable feat for the often dominant Adèle, who is supposed to be having her first sexual experience with a woman.  Indeed, not only were the actresses actually uncomfortable with the shoot (and it shows), but even the genitalia were artificial.  (See The Stars of ‘Blue is the Warmest Colour’ on the Riveting Lesbian Love Story, The Daily Beast (9/1/2013).)  As Maroh has opined, the effect is “ridiculous.”  And the canned-porn feel to the whole sequence is further buttressed by Kechiche’s use of more footage from the same shoot for yet another sex scene that pops up later in the film.

But Kechiche’s curious vision of lesbian sex is not his only indulgence that hurts.  About halfway through, the film’s strength – its episodic, day-in-the-life approach – becomes a weakness as the three-hour runtime takes its toll.  Through the third hour in particular, seemingly larger periods of time in the narrative pass between various scenes with very little change in Adèle’s appearance to clue in the viewer.  And by the closing credits, when the original French title is revealed to be La Vie d’Adèle – Chapitres 1 & 2, the viewer may very well wish that Kechiche had stuck to Chapter 1.

Expressing an appreciation (or lack thereof) for all sorts of films for over 25 years.
Previous: When Horror Films Were Creepier: Stuart Gordon’s Re-Animator (1985) and From Beyond (1986)
Next: Thor: The Dark World (2013)