Movie Reviews When Horror Films Were Creepier: Stuart Gordon's Re-Animator (1985) and From Beyond (1986) | Aflixionado 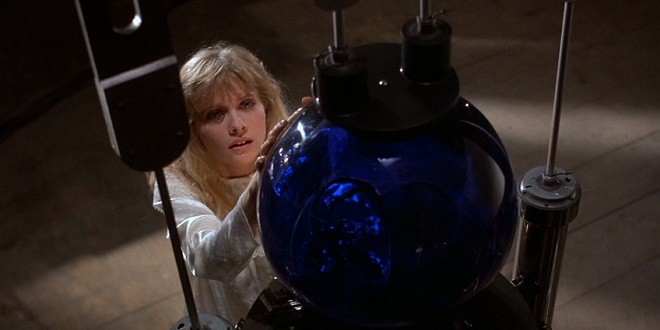 When Horror Films Were Creepier: Stuart Gordon’s Re-Animator (1985) and From Beyond (1986)

Posted by: Steven on October 30, 2013 in Film Essays Leave a comment

This Halloween season, I submit for your consideration the following definitions of the word creepy:

I may be wrong, but at least here in the United States, I imagine that the second definition evolved from the first definition – along with our culture and the media – as fewer and fewer things creeped people out.  With respect to sex, we here in the U.S. seem to hold particularly tight to that particular aspect of our Puritan roots.

The formula for the modern mainstream horror films fits comfortably into the world of the first definition:  (1) create an air of creepiness (e.g., mirror images that don’t behave like the real person); (2) make the audience jump in their seats every 12.3 minutes; and (3) if you have an A-list female star, keep it family friendly – you know, for the older kids (e.g., Mama (2013), House at the End of the Street (2012)).  Occasionally, the studios will let the writer and director stray into R-rated territory (as it makes it all the more appealing to the teenagers), although the MPAA seems to be far more squeamish than it used to be.  (e.g., In 1975, Jaws was rated PG; in 2013, The Conjuring is rated R.  Go figure.)

But then there was the mid-’80s.  Slasher flicks had quickly run their course.  And with the rise of the hysteria over the AIDS epidemic, a distinct class of B-movies emerged that embraced both definitions of creepy.  A full decade before the internet was even a thing, word would spread fast among certain subdivisions of high school hallways about the latest envelope-pushing movie to grace the new release shelf at the video store.  Groups of four to eight, representing both sexes, would gather about once a month at the home of whoever’s parents were out and pop in the latest VHS in a series of a new line (pun intended) of video atrocities – all of which seemed to spawn from the original Evil Dead (1981).  Drawing upon every conceivable angle to disgust/entertain their viewers, these filmmakers seemed intent on discovering some hypothetical balance of the lurid, the lewd, and the ludicrous.  Coincidentally (or perhaps not), the trajectory of the popularity of this brand of B-horror seemed to parallel that of hair metal – by the mid-’90s, they were all but dead and gone.  And at this point in history, the more robust entries in this unique subgenre have been relegated to the amorphous category of “cult films” (see, e.g., “The Cult 25: The Essential Left-Field Movie Hits Since 1983,” Entertainment Weekly).

Director Stuart Gordon is certainly one of the standout figures from that period.  As a veteran director of the Chicago stage, Gordon first picked up the camera for a TV adaptation of a play set in Wrigley Field (Bleacher Burns (1979)).  Eschewing the anticipated career path into the arthouses, Gordon drew upon two H.P. Lovecraft short stories – “Herbert West – Reanimator” (1922) and “From Beyond” (1912) – for his first two films for the big screen.  (Following in the footsteps of schlock-master Roger Corman and his Edgar Allen Poe films, Gordon would return to the work H.P. Lovecraft several more times during his career.)

Word has it that the idea for Re-Animator (1985) was spawned from a conversation with a friend where Gordon opined that the film genre had too many vampires (if you can imagine that) and not enough Frankenstein’s monsters.  Appropriately, the film opens with a prologue set in Zurich introducing the grizzly results of an experiment by Dr. Herbert West (Jeffrey Combs) and is followed by a conspicuously familiar score accompanying the opening credits.  Cut to a Massachusetts teaching hospital, where the young heartthrob Dan Cain (Bruce Abbot) is vigorously applying the chest compression on a big-breasted woman to no avail.  As his superior warns him, “A good doctor knows when to stop.”  Indeed.  And soon, his nubile girlfriend (Barbara Crampton) and his brilliant new roommate Dr. West are competing for the soul of the third-year intern.  Throw in the lecherous villain, Dr. Cain (David Gale), and you have all of the necessary ingredients for an unforgettable piece of cinema.

Although Gordon could not possibly have imagined realizing mainstream success with Re-Animator, the film did earn the Critics’ Choice Award at the Cannes Film Festival and an unapologetic fan in movie critic supreme, Pauline Kael.  Countering the ambitious special effects of the early age of animatronics, the unique mix of decadence and self-awareness gives Re-Animator a certain timeless quality.  Indeed, Re-Animator‘s most infamous scene – one of the most shocking in the history of film – was very clearly intended to be a visual pun. 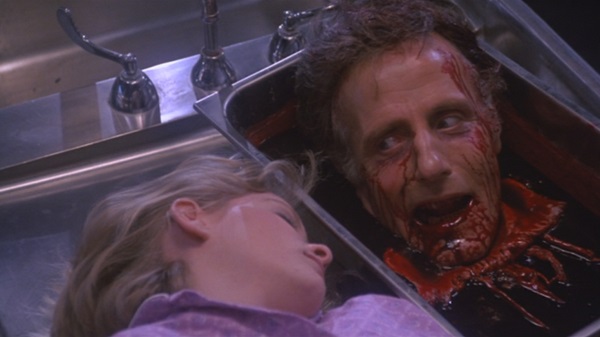 Lovecraft’s original story was itself a parody of Mary Shelley’s Frankenstein.  Appropriately, Re-Animator is very much a gothic horror film with Combs (at the time, a stage actor) very much playing it over-the-top as the classic mad scientist.  And yet, like so many movies of the ’80s, Re-Animator is also very much a product of its time.  It’s no coincidence that Gordon chose to replace the dangerous power of electricity that regenerated the dead and fueled the metaphor in Shelley’s novel with a drug glowing with neon.

Both Combs and Crampton would return for Gordon’s next Lovecraft adaptation.  The relative success of Re-Animator, which had been made for less than $1 million, earned Gordon a three-picture deal and a whopping $4.5 million budget for From Beyond.

Lovecraft’s scant short story presented the scenario of a scientist who builds a “resonator” to stimulate the pineal gland – attributed by René Descartes as the “principal seat of the soul” and by some new agers as the “Third Eye” – allowing the individual exposed to the resonator to perceive a parallel dimension of reality.  As it turns out, the living things in that other dimension can also perceive the individual.  In the film adaptation, Gordon and company add the (dubious) assertion that the pineal gland also regulates sex drive.  In investigating the death of Dr. Edward Pretorius (Ted Sorel) and the conspicuous lack of his head, Dr. Katherine McMichaels (Crampton) and detective Bubba Brownlee (Ken Foree) take the primary suspect and developer of the resonator, Dr. Crawford Tillinghast (Combs), back to the Pretorius home to uncover the mysteries.  Eventually, Dr. McMichaels tunes in (and is turned on) to the grotesque alternate world that the resonator offers, while Dr. Tillinghast’s previous exposure begins to change him.  As you might guess, from there on out, bad things happen.

Commercially speaking, From Beyond proved to be a sophomore slump for Gordon.  Artistically speaking, From Beyond is certainly a more serious affair than Re-Animator (at least on the surface).  Clearly inspired by The Thing (1982), the special effects evolved significantly from Re-Animator to bring to life a vision of distorted flesh that would have made David Cronenberg proud.  (Cronenberg’s remake of The Fly was released only two months prior.) 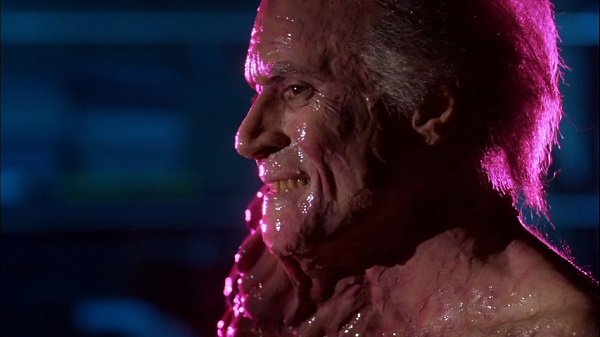 The results are mixed.  In a film like Re-Animator, which has certain satirical bite, a bit of camp is excusable (indeed, even appreciated); but in a film like From Beyond, the quality of the writing and the performances need to be a bit stronger to sell the shift in tone.

All that said, Re-Animator and From Beyond have more commonalities than differences.  Both fall within a certain category of B-movies that have a level of artistic ambition that may exceed the ability to execute (see also, e.g., White Dog (1982)).  Generally speaking, unlike most genre films that focus on either entertaining or disturbing, Gordon boldly sought to do both in equal measures.  More specifically, both films have a rather perverted villain and overtly sexualize the horror, which is in notable contrast to the mainstream horror films of today.

In this regard, films like Re-Animator and From Beyond tend to divide movie fans.  One group feels like there are certain places artists should never go.  Blood, guts, and beheadings are all fine; but anything involving sex (along with a few other things beyond the scope of this essay) is completely off the table.  The other group posits that going places where the audience doesn’t want to go may very well be the point of horror stories, and if there is a heart to this contradiction, it lies in the explicit recognition of an unconscious fear.  I suppose I sit more comfortably in the latter group.

Expressing an appreciation (or lack thereof) for all sorts of films for over 25 years.
Previous: Captain Phillips (2013)
Next: Blue Is the Warmest Color (2013)