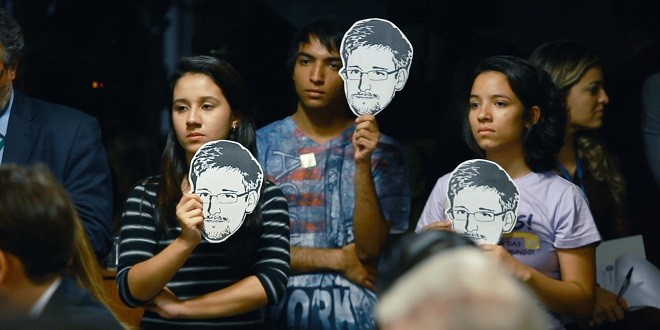 Does the damage from a loss of privacy in conducting our daily activities extend beyond those who have “something to hide”?  Absolutely.  It should go without saying that we change our behavior – consciously and unconsciously – when we know we are being watched, no matter who is doing the watching.  That said, the overwrought Oscar-winning documentary, Citizenfour, lacks both the realistic perspective and the intellectual honesty to make its own specific case against the U.S. National Security Agency (NSA) and for whistleblower Edward Snowden.

For starters, Snowden asserts that the internet-mining activities of the NSA represent “the greatest weapon of oppression in the history of man.”  I have some news for Snowden, director Laura Poitras, and the documentary’s key media mouthpiece, Glenn Greenwald: we already know we’re being watched, and we’re already behaving accordingly.  Many Americans (that is, who do not consider themselves terrorists, journalists, or “activists”) voluntarily swipe their iPhones with their Passbook apps at Starbucks, fully aware that the guy sitting in the corner could be hacking into their personal data to do some actual damage to their pocketbooks.  So what is the practical significance of the possibility that someone at the NSA might actually care enough, and be competent enough, to scan all that data to find out what books a particular person checking out on Amazon?  In the parlance of U.S. constitutional law, isn’t the toothpaste long out of the tube when it comes to our expectations of privacy on the internet?  Poitras simply assumes away such pesky practicalities, instead choosing to bury the viewer with a cloak-and-dagger approach to the narrative and a self-important sense of paranoia (which hits an eye-rolling crescendo in a scene involving a fire alarm test in a Hong Kong hotel).

Truth be told, Citizenfour should be titled “Edward Snowden: Millenial Martyr.” Snowden handpicked and invited Poitras to China to document his carefully-orchestrated and much-publicized revelations in June 2013, and Poitras’ smitten lack of objectivity shows.  Indeed, one can practically hear the conversation with the marketing department over the promo poster. (“Yes, a little smile for affability, but head down, for humility. And bathe him in an oppressive blue hue. Perfect!”) 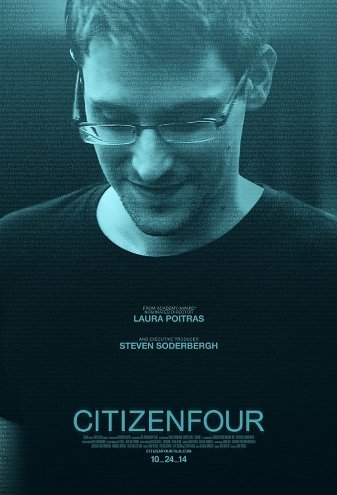 But motives and veracity matter, especially since Poitras devotes most of the screen time in deference to this high-school-dropout-turned-contract-analyst-in-the-right-place-at-the-right-time – not only with his characterizations of the NSA’s programs, but with his proclamations of the societal and legal implications.  While presenting Snowden’s lawyer to make the case that Snowden would never receive a “fair” trial in a U.S. court because his “intent to further the public interest” would not be recognized as a defense, Poitras would have us ignore circumstances that suggest that Snowden may have been less motivated by a libertarian concern over a government’s unwarranted intrusions upon its own citizens and more by a general attack on the NSA itself. Specifically, it seems rather ironic that Snowden would play Pontius Pilate with the safety of individual NSA field operatives – leaving it up to the “independent” journalists to determine the scope of the public disclosures, not unlike most of the NSA management who left it up to the administration lawyers to determine the scope of their snooping.  (See Fred Kaplan, “Sins of Omission”, slate.com (10/16/2014).)

For a journalistic approach to the evolution of the NSA post-9/11, with far more breadth and depth than Citizenfour, I highly recommend the two-episode Frontline presentation, “United States of Secrets”.

Expressing an appreciation (or lack thereof) for all sorts of films for over 25 years.
Previous: The Disappearance of Eleanor Rigby: Him and Her (2014)
Next: Kumiko, the Treasure Hunter (2015)