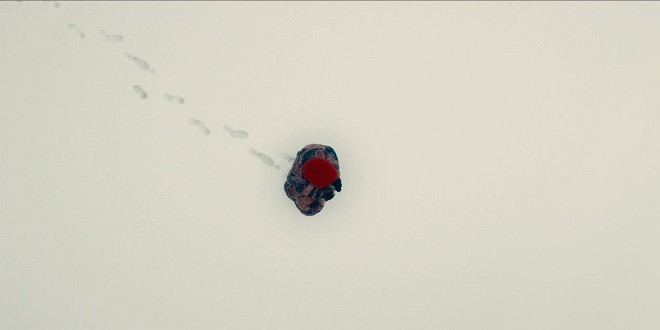 Posted by: Steven on March 28, 2015 in Movie Reviews Leave a comment

Human beings are hunters and gatherers – walking, talking contradictions whose ambitions trump even their biological imperatives.  Yet, with all of our success as a species, at this point in our history, so many hunters and gathers are resigned to cramped spaces – apartments, cubicles, offices – and suffocated by the social expectations that simultaneously check and amplify those biological imperatives in a world of decreasing resources.  The plan for the modern journey of life is set: birth, school, job, marriage, children, and death.  So it is quite appropriate that the urban legend-based narrative of David and Nathan Zellner’s Kumiko, the Treasure Hunter begins in one of the most densely-populated cities in the world (Tokyo) and ends in one of the most desolate of cinematic landscapes.  What is relatively unique is that the Zellners have chosen a 29-year-old woman (Rinko Kikuchi) as their aspiring conquistador.

Of course, one only needs to view the trailer, and hear Kumiko’s first full sentences of dialogue, to realize that she is clearly delusional.  In breaking away from the bounds of both society and reality, the treasure she longs to hunt for and gather is the fictional loot so foolheartedly buried by Steve Buscemi’s character in the movie, Fargo (1996) (perhaps, the brothers Zellners’ own recognition of the futility of following in the footsteps of the brothers Coen?)  Fortunately, Kumiko, the Treasure Hunter never devolves into an exercise in comi-tragic gawking, as the Zellners earn the viewer’s empathy in a series of episodes early on; the normal people – the office ladies right out of college, the married-with-child schoolmate – seem to almost as vapid and unsettling to us as they do to Kumiko.  And yet, the Zellners never let us take the consequences of Kumiko’s state of mind for granted.  Why is she standing in front of that subway train with her pet rabbit?  What’s the deal with that grinning taxi driver?  What’s going to happen if she keeps banging away at that sheet of ice with a rock?  For a film with so little happening on the page, there is a remarkable level of suspense – a sense that anything great and terrible is possible – aided in no small part by the cinematography of Sean Porter and the score by The Octopus Project.

With a character-driven piece like this, the requisites may seem so simple, so modest – that is, all we really need to believe is that Kumiko believes.  We do believe.  Just how much of that belief can we attribute to the writing versus the acting?  Who knows.  But one truth does radiate from the screen: Kikuchi is simply sublime.  In spite – or perhaps, because – of the fact that she speaks very little throughout, Kikuchi should be in the conversation for the best performance by an actress in 2015.

Expressing an appreciation (or lack thereof) for all sorts of films for over 25 years.
Previous: Citizenfour (2014)
Next: Revisiting The Thin Blue Line (1988) and Its Missing Pieces