Movie Reviews Is the World Too Big for Godzilla? | Aflixionado 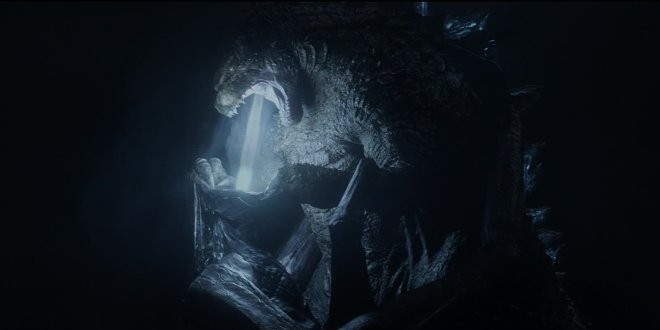 Is the World Too Big for Godzilla?

With about four channels of television available for our entertainment and visits to the local cinema relegated to relatively rare family outings, for many of us children of the 70s, the highlight of our week was the Saturday afternoon Creature Features.  For me, the most anticipated of the Creature Features were the Japanese monster movies (the word “kaiju” had not made it into the Midwestern vernacular), and the king of the monsters was Godzilla.  When I was five years old, I dreamt of a giant boar-like creature so large that it blocked out the bloody sunset as it stood on the hilly fields west of our house – spawned from the creative division of Toho studios that had set up shop in my subconscious.  It was the only dream that dispatched me to my parents’ room in the middle of the night.  And why not?  Unlike Dracula or Frankenstein’s creation, Godzilla and company could bring about the end of the world, and we were all but helpless to stop it.  At that age and at that time, size was everything, and the Godzilla films were the ultimate in horror.

Almost four decades later, I revisited the original Godzilla (1954) – or I should say, the 1956 version with the English-speaking narrator/reporter (Raymond Burr) edited in (horribly) for American consumption.  But all those years witnessing the evolution of cinematic special effects took their toll.  Godzilla, with its spastic little arms, looked pretty ridiculous to these jaded eyes.  But as a fable for the nuclear age, I could appreciate the uncompromisingly grim tone.  Tokyo is literally toasted.  Humanity’s desperation is palpable, even if the finale feels like a cheat (both in terms of plot and theme).

Amidst countless sequels pitting Godzilla up against other monsters (including King Kong), the franchise has been rebooted twice.  On its 30th anniversary, Toho released The Return of Godzilla (1984) (the “return” meaning a direct sequel to the original), which was again re-edited for the Americans as Godzilla 1985.   And five years after CGI took a big step forward with Jurassic Park (1993), the director of disasters, Roland Emmerich, introduced a more naturalistic Godzilla (1998), which ended up being a significant part of the movie’s failure (condescending to the dreck rather than embracing it, as Roger Ebert so eloquently put it).

Fast forward another 15 years and director Gareth Edwards – whose first feature film (Monsters (2010)) made waves as an indie take on the genre – seems like the most natural choice for a third reboot.  But the world is much larger now.  At home, the kids have high definition TV, 70 inches or more in diameter, brimming with options in terms of apocalyptic and post-apocalyptic TV series, 1st person role-play games, and the like.  When those kids do make it to the cineplex, everything is available in 3D, IMAX, etc.  Can Godzilla be relevant in 2014?

For Godzilla (2014), Edwards and screenwriter Max Borenstein seem to take a page from the Christopher Nolan playbook for franchise film (including few specific elements from The Dark Knight Rises (2012)).

As such, this third reboot (like the original) offers little in the way of levity.  Main characters played by big-name actors die.  In contrast to Guillermo del Toro’s action extravaganza Pacific Rim (2013) – a chest-beating embrace of manga/video game culture (right down to the soundtrack) – Edwards is clearly going for contemporary menace.  It’s probably no mistake that Godzilla’s antagonist looks suspiciously similar to the monster in Cloverfield (2007) – a film that used both the found footage conceit and a familiar setting to tap directly into memories of 9/11.  Here Edwards digs even deeper into the 21st century psyche by invoking the 2004 tsunami as a metaphorically apt introduction to the bigger beefier title character, which looks upon us as we would upon ants.

That said, director Matt Reeves understood that to sell this genre with a serious tone, the audience has to want to suspend its disbelief, and the extent to which the audience is willing to do so tends to be inversely related to the complexity of the setup.  Cloverfield was simple – eschewing the hows and the whys entirely to drop the viewer right into the whos, whens, wheres, and whats.  Perhaps hampered by honoring a mythology of dozens of films, Edwards seems to tread too carefully to avoid the r-word that sunk the last reboot (“reinvention”).  In doing so, the end result relies a bit too much upon exposition (complete with new acronyms), not all of which makes sense even for those viewers who are otherwise willing to go along for the ride.  The most significant problem is the characterization of this Godzilla, which at one point is referred to as an “alpha predator” merely hunting its prey, and at another point, a “god” to enforce some sort of environmental karmic code.  But try as he might, Edwards cannot conjure up a Godzilla that is all things to all fans.

Although the nature of the most recent incarnation of Godzilla may be fuzzy, Edwards nonetheless maintains the original theme.  But will a cautionary tale of the dangers of all things radioactive resonate with a generation born after the fall of the Berlin Wall?  As the current undercurrent of mass anxiety goes, the threat of global thermonuclear war has been replaced with random acts of violence.  Children are now trained to cower beneath their school desks for different reasons.  In 2014, it is fossil-fueled global warming that seems to dominate the headlines.  Perhaps that’s the point – i.e., whatever we do, we shouldn’t be looking there for energy sources.

But whether the film’s thematic position represents fear mongering or responsible politics is beside the point.  So too is the lack of Spielbergian levels of human character development that seems to bother so many movie reviewers.  Ultimately, this is a B-movie genre, and what the audience wants first and foremost is big destructive action.  To this end, Edwards plays his cards close to the chest until the second half of the movie.  When the inevitable clash of the titans does occur – precipitated by an amazing sequence of commandos high-diving into the foray – the movie benefits from a certain economy, particularly in the sound design.  The kinetics of the battles have a distinct sense of gravity, unspoiled by the boundless energy that animates most modern monster slugfests.  None of these giants move like pro wrestlers.  They’re stalking and raging – hitting, clawing, and biting for survival.  Pain is inflicted.  When things get knocked down, they have a hard time getting back up.

All that said, will Godzilla (2014) give five-year olds nightmares in this day and age?  I don’t know.  I sure hope so, though.

Expressing an appreciation (or lack thereof) for all sorts of films for over 25 years.
Previous: Blue Ruin (2014)
Next: Edge of Tomorrow (2014)