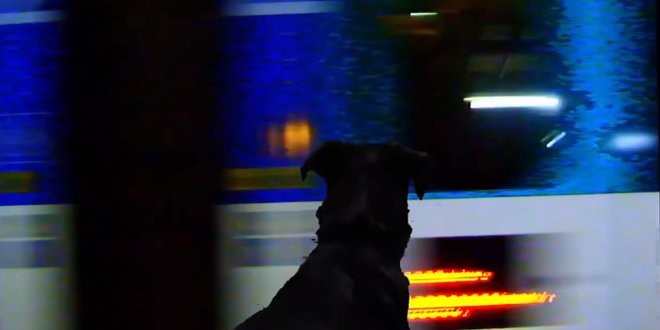 Posted by: Steven on February 1, 2015 in Movie Reviews Leave a comment

Every once in a while throughout the history of popular art, it seems like a minimalist movement comes along that enables a few individuals of marginal talent (and a particular brand of salesmanship) to hop on the bandwagon and capture the attention of the czars of taste.  Punk rock.  Abstract expressionism.  And yes, the French New Wave.

With that in mind, to put it metaphorically with the level of existential consideration so vehemently demanded, Jean-Luc Godard’s Goodbye to Language 3D is a steaming pile of shit.  And the fact that feces and flatulence appear so often in this random/semi-random set of vignettes should not self-referentially shield it from the criticism it deserves.  Nor should opening the film with a line like “those who lack imagination take refuge in reality.”  To be sure, Godard may very well know he’s created a pile of shit, but that doesn’t mean we have to roll around in it like his dog.

Notwithstanding the grumpy laments of contemporary handheld devices featured prominently in the opening scenes, Godard himself tweeted this synopsis of Goodbye to Language 3D:

“The idea is simple: A married woman and a single man meet. They love, they argue, fists fly. A dog strays between town and country. The seasons pass. The man and woman meet again. The dog finds itself between them. The other is in one, the one is in the other and they are three. The former husband shatters everything. A second film begins: the same as the first, and yet not. From the human race we pass to metaphor. This ends in barking and a baby’s cries. In the meantime, we will have seen people talking of the demise of the dollar, of truth in mathematics and of the death of a robin.”

Yes, the idea is simple. That incoherent plot of Godard’s, such that it is, centers around a nubile French women (Zoe Bruneau), often in varying degrees of undress, cavorting with a much older man (Kamel Abdeli).  And this came from the mind of a 83 year-old Frenchman?!  Imagine that.  But wait, maybe I need to temper my sarcasm because it’s all supposed to be “critique,” right?

The bottom line is that it’s easy for one who cannot write his own thought-provoking dialogue (realistic or otherwise) to populate his film with quotes from Plato, Darwin, Sartre, etc.  I mean, it makes all the really educated viewers feel so smart!  And once that’s accomplished, is it really much of a stretch for one who cannot actually create a compelling visual story to be lauded for having a “contempt for the modern form of storytelling”?

But enough about the narrative (or lack thereof).  The style is the substance, right?  Let’s talk about that revolutionary use of 3D.  The most touted shot occurs when two images split simultaneously, and appear on top of one another (you know, like a double exposure), during an outdoor conversation turned violent.  Amazing!  I mean, it takes a real ground-breaker to separate the right lens from the left lens so we can’t really see either image without shutting one eye.  (Now, what about the possibility that both eyes might just roll completely out of our heads?)

But enough about the visuals.  Let’s also talk about what may be the most disjointed sound design ever.  Setting aside the fact that the “dialogue” and familiar classical pieces forming the score are prematurely lopped off along with all the jump cuts, the right side of the sound track goes out, comes back, the left side goes out, and comes back; the volume goes up, the volume goes down; random sounds pop in, and then carry over into the next scene.  Based to this aspect alone, I would submit that Godard is not nearly as contemptuous of storytelling as he is of his own audience.

So on balance, does Godard’s signature messiness all add up to impenetrably “provocative,” “unconventional,” and “subversive” art?  Maybe.  Or he could just be completely full of shit.

Expressing an appreciation (or lack thereof) for all sorts of films for over 25 years.
Previous: A Most Violent Year (2014)
Next: The Disappearance of Eleanor Rigby: Him and Her (2014)