Movie Reviews Review of A Most Violent Year (2014) | Aflixionado 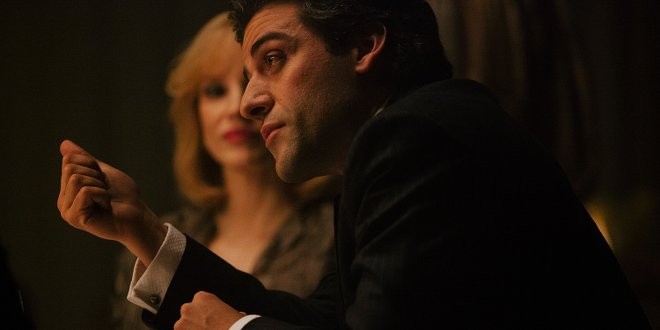 Posted by: Steven on January 25, 2015 in Movie Reviews Leave a comment

Writer/director J.C. Chandor burst onto the scene with Margin Call (2011), which dramatized a 24-hour period in 2008 when the major players at a New York brokerage firm realized (or could no longer ignore) that they had built their house of cards on snake oil.  Chandor’s pontificating – and often cryptic – dialogue probably seemed righteous on paper, but it comes across as somewhat less than convincing on screen (even when delivered by a rather impressive cast for a feature debut).  With his second film, All Is Lost (2013), Chandor seemed to hit the reset button – pairing down the story to one solitary character in a boat with virtually no utterances and just a hint of socioeconomic commentary.

With his third film, A Most Violent Year, one could argue that Chandor has returned to the more explicit thematic considerations of Margin Call; but this time around, Chandor has judiciously cast any such indictments of capitalism into more fundamental human terms – namely, the irreconcilable clash between ambition and ethics.  Opening during the height of urban decay and corruption in New York City circa 1981, the forebodingly and aptly named Abel (Oscar Isaac) drops his family’s savings on a 40% nonrefundable down payment on a harbor-front facility that will take his heating oil distribution company to the next level.  Notwithstanding the title, the dramatic stew is concocted from the fact that Abel has 30 days to secure the financing for the remainder of the purchase price, during which hijackers are stealing his trucks, the Teamsters are pushing to allow his drivers to carry guns, and the D.A. has brought charges against his company.   All such parties – as well as his own wife/CFO (Jessica Chastain) and lawyer (Albert Brooks) – seem to either take advantage of, or take issue with, Abel’s nature – a distinctly lighter shade of grey among his more ruthless competitors.

When we allow ambition to trump all of the governing principles of society other than order, we get organized crime, which hovers over these proceedings like a retro-70s haze.  The vibe is Sidney Lumet.  And Isaac’s look – a coif and couture earned the hard way – evokes Al Pacino (even if Abel is a far cry from Tony Montana or Michael Corleone).  If Goodfellas (1990) covered the damned-if-you-do side of the mob narrative, then A Most Violent Year certainly covers the damned-if-you-don’t angle.

That said, Chandor’s voice is far more subdued than it was in Margin Call, as Abel’s pragmatic ethicist ultimately comes across as neither a hero nor a modern day Job.  That subtle, noncommittal approach to storytelling can be refreshing (and to those who think about movies, even provocative); but it can also strain the viewer’s emotional connection.  And even with strong performances from top to bottom (including Chastain discarding the textbook on playing mobster’s daughters and Brooks continuing a surprisingly effective dramatic trajectory that began with Drive (2011)), one cannot deny that there is distinctly lagging pace to A Most Violent Year.  Still, Chandor – with his ability to consistently attract talent on both sides of the camera – remains one of the most interesting “young” directors in America and seems poised to deliver a cinematic masterpiece.

Expressing an appreciation (or lack thereof) for all sorts of films for over 25 years.
Previous: American Sniper (2014): Pandering to a Chickenhawk Nation
Next: Goodbye to Language 3D (2014)