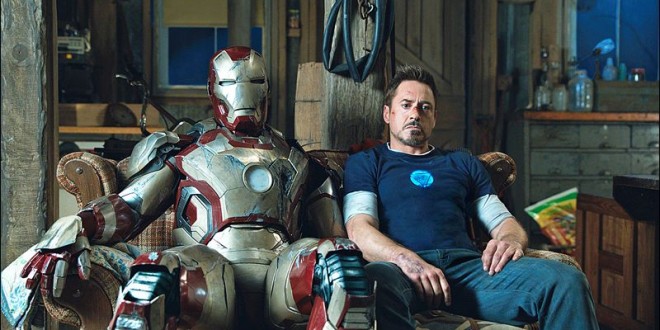 Iron Man 3 is the best Iron Man movie ever! …  Bring it on, Man of Steel! … It’s the official start of Summer Movie Season 2013, and I want to throw my hat into the ring for getting a “persuasive” quote onto a TV ad or DVD cover.  Or maybe a sidebar on a webpage?

In last summer’s mega-convergence of superheroes and market forces, The Avengers, Tony Stark/Iron Man (Robert Downey Jr.) found himself thrust from a world where the most formidable villians were hyper-capitalistic weapons dealers and terrorists into a universe where a wormhole can be generated by cubes of unlimited energy and a demigod with a magic hammer may appear at any time riding a lightning bolt.  It’s all enough to give a simple genius/billionnaire/philanthropist and his better half (Gwyneth Paltrow) some serious PTSD headaches.

Within this narrative backdrop, Iron Man 3 could have easily gone dark.  (Compare the humorless preview for the next Marvel film, Thor: The Dark World.)  But going in that direction would betray the appeal of Downey’s undeniably perfect take on Stark.  Hollywood legend has it that the casting of Downey was originally inspired by his lead performance in writer/director Shane Black’s neo-noir/comedy, Kiss Kiss, Bang Bang (2005).  Suffice to say, reuniting Downey and Black was the right move.  Some of Stark’s one-liners are pretty subversive of the genre – even for the Iron Man subfranchise.  Echoing the self-consciousness of their prior collaboration, the more attentive viewer can expect at least one meta-joke about a particular casting choice.  And Black even outdoes Joss Whedon in using the obligatory Marvel post-credits scene to wink at the audience.

To be sure, the villains are still hyper-capitalists (Guy Pearce) and terrorists (Ben Kingsley), but with a plot revolving around a DNA-altering drug appropriately called Extremis, the sci-fi/fantasy element has been ramped up since Iron Man 2 (2010).  (How could it not be after The Avengers?)  Nonetheless, Black and co-writer Drew Pearce add some much-appreciated nuance to the standard comic book tropes.   The chickens of Stark’s past as über-jerk come back to roost.  But the levels of melodrama normally associated with comic book characterizations are dialed down a bit and peppered with a tasteful dash of cynicism (e.g., the re-branding of Don Cheadle’s “War Machine”).

Much of the superhero action is as cartoonish and weightless as ever.  Eventually, tentpole superhero films need to ramp up the action for action’s sake, and as such, the 25-minute finale a-la Transformers really sucks some of the spontaneous fun out of the film.  That said, as if to address Captain America’s indictment of Stark in The Avengers, Black devotes a surprising amount of screen time to Stark sans the suit.  At one point, he is left to solve the mysteries of global scope within a small Tennessee town armed with nothing more than his MacGyveresque skills and the assistance of a spunky 12 year-old boy (Ty Simpkins).  For the most part, Black and company manage to strike a healthy balance between honoring the comic book roots and keeping the civilian audience engaged.

So how should I end this review?  Hmmm.  How about this:  Iron Man 3 is the best Marvel comic movie! … (Barely)

Expressing an appreciation (or lack thereof) for all sorts of films for over 25 years.
Previous: A Fantasy in Remembrance: A Review of To the Wonder (2013) with Roger Ebert
Next: Star Trek Into Darkness (2013)