Movie Reviews A Fantasy in Remembrance: A Review of 'To the Wonder' (2013) with Roger Ebert | Aflixionado 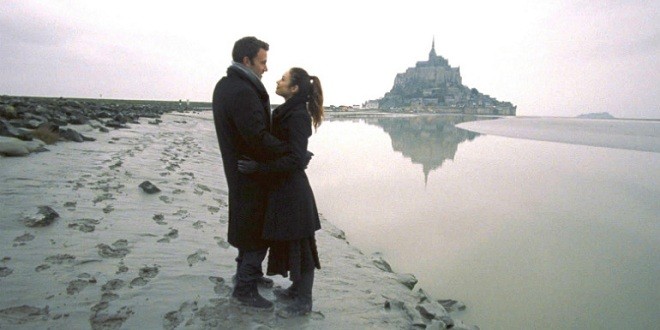 Posted by: Steven on April 15, 2013 in Movie Reviews Leave a comment

On a weekly basis back in the 1980s, Roger Ebert and Gene Siskel invited a teenager from a small town in Florida and millions of others who did not live in New York or Los Angeles into their frank and articulate conversations about all sorts of movies.  Siskel and Ebert reminded us that films were not just entertainment, they were art – no less worthy of formal criticism and appreciation than novels, poetry, painting, dance, or theatre.  After Siskel died in 1999, Ebert carried the torch with accessible and intelligent film reviews into the age of the internet and social media.  Indeed, Roger Ebert’s Journal is one of a few websites followed on this blog.  Like so many tributes to Ebert since his death on April 4, 2013, I could go on and on about my favorite movie reviews (e.g., “Synecdoche, New York,” November 8, 2008), my favorite quotes (e.g., ““I will one day be thin, but Vincent Gallo will always be the director of The Brown Bunny”), my favorite non-film essays (e.g., “New Agers and Creationists Should Not Be President,” December 2, 2009), or my favorite TV show segments (e.g., Roger Ebert and Martin Scorsese’s Best of the 1990s); but instead, I have opted to pay my respects in the form of a sort of pragmatic fantasy fulfillment.  So in his remembrance and honor, the following review is a completely fictional dialogue (a la At the Movies) between Ebert and myself using excerpts from Ebert’s last review of director Terrence Malick’s To the Wonder, and to put you in the appropriate mood, I will start by posting a link to Siskel & Ebert’arguing about my favorite movie.

Roger E.:  “Released less than two years after his The Tree of Life, an epic that began with the dinosaurs and peered into an uncertain future, Terrence Malick’s To the Wonder is a film that contains only a handful of important characters and a few crucial moments in their lives.  Although it uses dialogue, it’s dreamy and half-heard, and essentially this could be a silent film — silent, except for its mostly melancholy music.

The movie stars Ben Affleck and Olga Kurylenko as a couple who fall deeply, tenderly, transcendently in love in France.  Malick opens as they visit Mont St. Michel, the cathedral perched on a spire of rock off the French coast, and moves to the banks of the Seine, but really, its landscape is the terrain is these two bodies, and the worshipful ways in which Neil and Marina approach each other.  Snatches of dialogue, laughter, shared thoughts, drift past us. Nothing is punched up for dramatic effect.

Marina, a single mother, decides to move with her little daughter, Tatiana, to America with Neil, and the setting suddenly becomes the flatlands of Oklahoma, a land seen here as nearly unpopulated.  Oh, there are people here, but we see few of them and engage with only a handful.  Again there is the hushed serenity as in France, but differences grow between them, and there is anger now in some of their words.  Neil reconnects with Jane (Rachel McAdams), an American girl he was once in love with, and romantic perfection between he and Marina seems to slip away.

In Oklahoma, we meet Father Quintana (Javier Bardem), a priest from Europe, whose church is new and brightly lit.  We can almost smell the furniture varnish. His faith has been challenged, and many of his statements are directed toward Jesus Christ, as a sort of former lover.  Quintana visits prisoners, the ill, the poor and the illiterate, whose dialogue is half-understood even by themselves.

As all of these relationships intertwine, Malick depicts them with deliberate beauty and painterly care.  The mood is often similar to the feelings of the early small-town scenes in The Tree of Life.  Malick has a repertory of fundamental images he draws upon.

We don’t need to be told Malick’s in an autobiographical vein here; these memories surely belong to the storyteller.  In both films, he is absorbed in living and dining rooms, looking out upon neat lawns and neighborhood pastoral peace.

As the film opened, I wondered if I was missing something.  As it continued, I realized many films could miss a great deal.”

Steven B:   “The pacing was really wonderfully abbreviated – certainly in the first half.  If the standard feature film takes its conventions from the novel – with a heavy reliance upon dialogue and exposition, by comparison, Malick uses the conventions of poetry.   Much of the story lies between the lines, but for the viewer willing to immerse him or herself – the story is certainly there to be found, even if neat resolutions are not.”

Roger E.:  “Although he uses established stars, Malick employs them in the sense that the French director Robert Bresson intended when he called actors “models.”  Ben Affleck here isn’t the star of Argo but a man, often silent, intoxicated by love and then by loss. Bardem, as a priest far from home, made me realize as never before the loneliness of the unmarried clergy.  Wandering in his empty church in the middle of the day, he is a forlorn figure, crying out in prayer and need to commune with his Jesus.”

Steven B:  “The performances really rely upon movement and expression – not on words.  Indeed, at times, the emotional dance between the characters takes on a physical manifestation.  And yet, for the most part, it never feels artificial or unreal.  In any event, all of the actors here appeared to be on the same page with what Malick was trying to achieve.”

Roger E.:   “A more conventional film would have assigned a plot to these characters and made their motivations more clear.  Malick, who is surely one of the most romantic and spiritual of filmmakers, appears almost naked here before his audience, a man not able to conceal the depth of his vision.

‘Well,’ I asked myself, ‘why not?’  “Why must a film explain everything?  Why must every motivation be spelled out?  Aren’t many films fundamentally the same film, with only the specifics changed? Aren’t many of them telling the same story?  Seeking perfection, we see what our dreams and hopes might look like.  We realize they come as a gift through no power of our own, and if we lose them, isn’t that almost worse than never having had them in the first place?'”

Steven B: “Malick’s last film, The Tree of Life, certainly divided audiences, and we clearly sat on opposite sides of that divide.  I found the attempts to formally contextualize this story of growing up in a small Texas town with the beginning of time and the gateway to heaven to be off-putting.  In this film, we have very similar visual approaches without the overly overt attempt at philosophical and religious shoe-horning.  Even the priest’s contemplations carry a secular quality.  Malick wisely leaves it to the images and the voiceovers Kurylenko, Bardem, and Adams to convey.  And the film becomes a testament to how far a filmmaker can effectively push to realize the idea of pure visual storytelling.”

Roger E.:  “There will be many who find To the Wonder elusive and too effervescent.  They’ll be dissatisfied by a film that would rather evoke than supply.  I understand that, and I think Terrence Malick does, too. But here he has attempted to reach more deeply than that: to reach beneath the surface, and find the soul in need.”

Steven B:  “Perhaps.  But I do not think the film is fundamentally elusive.  It is a film that demands your attention – both your mind and your heart.  If you are willing to commit, Malick makes it worth the effort.  Not being a big fan of The Tree of Life or The Thin Red Line, I found the first half – or more accurately, the first 45 minutes – of this film to be one of the most heartbreaking experiences I have had in the cinema in quite a while – even if the second half lingers a bit too much and overstays its welcome by about 20 minutes.

To me, the ‘soul in need’ here is pushed and pulled by the forces of longing and loneliness that inhabit both the most cloistered of existences and closest of relationships, and somewhere in between, we strive to find the place for love.  Or maybe just peace.  Ultimately, the nobility of our humanity exists in our attempt – not in the end result.”

Expressing an appreciation (or lack thereof) for all sorts of films for over 25 years.
Previous: The Place Beyond the Pines (2013)
Next: Iron Man 3 (2013)